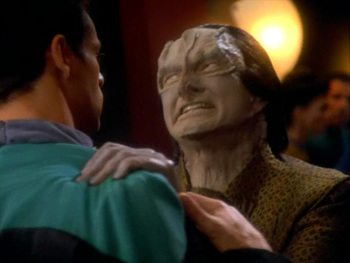 "Help me! Please, help me!"
Bashir and Garak are having their usual once-a-week lunch together and discussing a piece of a Cardassian literature known as The Never Ending Sacrifice. Bashir isn't impressed, noting how it's just one Cardassian blindly serving the state, dying, and their descendant doing the exact same thing. During this discussion, Garak seems unusually testy, insulting Bashir over his dislike of the novel, whining about long lines at the Replomat, and experiencing a notable pain in his head. Bashir notes he looks ill, but Garak storms off when he tries taking him to the infirmary.
Advertisement:

While walking the promenade late that night, Bashir catches Quark and Garak conversing. He questions the shifty Ferengi over what they were talking about, but Quark insists Garak was just looking for a sizing scanner for his shop.

The next day, after a futile attempt to find some old Cardassian files, Bashir is summoned to Quark's. There's Garak, blitzed out of his gray gourd and refusing to leave. Bashir confiscates his latest bottle and tries convincing him to leave. In the middle of their argument, Garak suffers a seizure and collapses.

In the med-bay, the source of Garak's bizarre behavior has been discovered. A mysterious cranial implant is wreaking havoc in his head. Bashir asks Odo if he knows anything, having been on the station when it was still Terok Nor, but Odo is clueless.

At the mention of Quark, however, Odo recalls that there have been numerous transmissions to Cardassia Prime over the last few days. While unknowingly being spied on by Odo, Quark contacts a Cardassian officer named Boheeka. The two share some laughs but soon get to business. Quark is offering big money for a piece of Cardassian biotechnology. Receiving the requisition code, Boheeka says it will be a cinch... until a blinking red light spoils the mood. It turns out Quark is looking for classified information. Proclaiming that he'll be lucky if the Obsidian Order only ruins him instead of executes him, Boheeka terminates the transmission.

After showing the recording to Bashir, Odo explains that the Obsidian Order is the feared Secret Police of the Cardassian Union, its ever watchful eyes and ears. Odo and Bashir speculate the Obsidian Order may have put the device in Garak's head.

Returning to the infirmary, Bashir is short one Garak, who appears to have checked himself out. Tracking him to his quarters, he finds Garak shot up with enough tranquilizer to knock out a space rhino. In a delirium, Garak explains the truth about his implant.

Before his exile, Garak had the endorphin emitter inserted into his head by the Obsidian Order. The device was designed to stimulate the pleasure center of his brain if captured, effectively making him immune to torture. Well, he found some torture alright: exile on DS9. Unable to stand his existence there, he rigged up a device to activate the implant at his leisure. A few minutes a day at first, but over time he became completely dependent on it. Now it's breaking down, and he's not taking the endorphin withdrawal well.

In the midst of his episode, Garak reveals the source of his exile: He was a former Cardassian Gul, who destroyed a ship containing escaped Bajoran prisoners... as well as his aide Elim, 97 civilians, and the daughter of a prominent military official. Garak defies Bashir to feel sympathy for such an evil man, but Bashir won't be moved from helping a patient. He starts by using Garak's device to deactivate the implant.

After shooing away Odo, Bashir settles in for a long night with an unconscious Garak. The Cardassian awakens later that night, weeping like a madman. He's in a state of Tranquil Fury, smashing vases and overturning tables while claiming he feels more clear-headed than ever...and that his story about the shuttle was a lie.

The real reason he was banished was for freeing several Bajoran children he was supposed to interrogate. He knew they knew nothing, and set them free back to the streets. He didn't commit an atrocity—rather, his eternal regret is not committing one. After a brief tussle with Bashir, he has another seizure. In the infirmary yet again, Garak reveals the real real reason he was exiled.

The story about someone setting the young Bajorans free was true, but no one knew who. Garak felt eyes turning toward him, so, being a typical Obsidian Order member, Garak set out to frame his friend Elim. Before he could begin, however, he discovered that Elim beat him to the framing. Betrayed by Elim, Garak was exiled to DS9.

Bashir needs some Cardassians medical information that got wiped from the station's computers, and Bashir knows just the Cardassian to give it to him: Enabran Tain, retired head of the Obsidian Order and Garak's erstwhile mentor. Traveling to the colony Tain is retired on, Bashir is surprised to find the former spymaster waiting for him. And even more surprised Tain knows a lot about Bashir, right down to how he takes his tea.

After a menacing back and forth, Tain gives him the info to save Garak. Not out of sympathy, but because Garak leading a trite existence on DS9 is a worse punishment than dying. Before he leaves, Bashir inquires about Elim. An amused Tain explains that "Elim" is Garak's first name. That means that none of what Garak has said is entirely true.

After a successful procedure, Bashir and Garak return to their usual weekly lunch meeting. Garak is in typically high spirits and gifts Bashir some Cardassian literature he might actually enjoy this time. The doctor is annoyed that he still can't tell which story about Garak's past is true. Garak responds:

Garak: My dear Doctor, they're all true.
Bashir: Even the lies?
Garak: Especially the lies.

Example of:
Riddle for the Ages