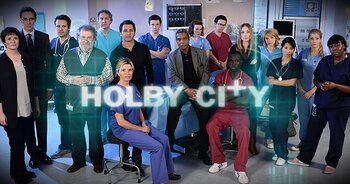 The Spin-Off of Casualty launched in 1999, this focuses more on the lives of the medics than the actual emergencies involved. However, it is nearly always set within the hospital.

Like its parent show, Holby City has been running for an alarmingly long time, leading to much cast turnover, although unlike its parent show none of the original cast are still present. As of autumn 2016, the longest-running regular character is Ric Griffin (Hugh Quarshie), who debuted in 2001; the iconic Jac Naylor (Rosie Marcel), meanwhile, debuted in 2005.

The show finally drew to a close in 2022, with the BBC citing efforts to produce more programmes based outside of the south of England.