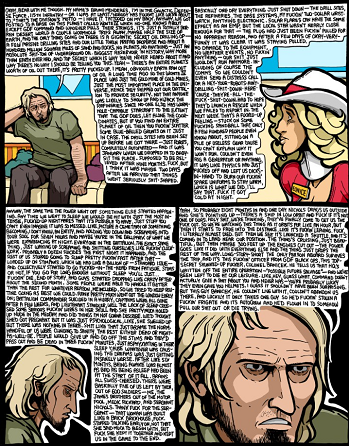 Could you say that again? I think my ears are bleeding.
"It's like a lot of films one sees today, not that I see very many, but to me they are what I call 'photographs of people talking'."
— Alfred Hitchcock
Advertisement:

Virtually all works in most narrative artistic media will feature at least some amount of talking at some point. Generally, in a plot-driven story the dialogue tends to be secondary to the plot, themes, setting etc. while subtly adding to all.

And then there are these, works in which dialogue and speech predominate. A typical scene in works like this consists of two or more characters talking to each other (or sometimes one character speaking by themself, as in the case of one-man theatrical works).

Works like this tend to be based heavily around the Seinfeldian Conversation. If the writer of the work turns to this trope because the writer in question finds they have a facility for writing witty, amusing dialogue, the work is likely to turn into a World of Snark. Genres in which this trope is particularly common include the Courtroom Drama or Slice of Life works.

At what point does a work qualify for this trope? Difficult to say, and varies with the medium: a play is usually expected to have much more dialogue than a film, for example (except in more experimental theatre). As a rule of thumb, if a typical scene in the work in question consists of not much happening aside from one or more characters speaking, it's probably this trope. That is to say, a significant majority of the work consists of speech of some kind.

Note that, as with all tropes, this is not a bad thing. Works which place a premium on dialogue can often have a much more naturalistic vibe than works in which dialogue is secondary, and end up with better developed characters. On the other hand, when executed poorly these works can end up feeling slow and draggy. The more dialogue, the higher the probability of unintentionally silly situations like Talking Is a Free Action or Narrating the Obvious. In film, it's sometimes seen as a faux pas for the plot to be driven forward almost entirely by spoken exposition (as the page quote can attest)—see Show, Don't Tell. In visual media with text (such as comic books or webcomics), writers may run the risk of creating a Wall of Text, as in the page image.

See also all of the various Dialogue tropes. Closely related to Talking Heads. See also Character Filibuster for when a single character talks for an extended period of time. Compare Script Fic, Log Fic and Featureless Plane of Disembodied Dialogue (a conversation taking place in an apparent vacuum), unusually dialogue-heavy sub-genres of Fan Fic. Narrating the Obvious and Talking Is a Free Action are examples of when too much dialogue break's a viewer's Willing Suspension of Disbelief. Works using this trope are particularly prone to Metafiction, especially The Power of Language.