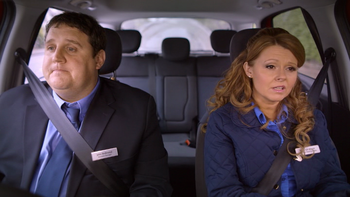 Car Share (or Peter Kay's Car Share) is a Brit Com which ran for two series and various special episodes from 2015 to 2018. It stars Peter Kay and Sian Gibson as John Redmond and Kayleigh Kitson, two very different co-workers at a local supermarket who take part in a work car sharing scheme. Each episode mainly consists of the two main characters sitting in the car chatting, bickering and singing along to the radio as they drive to work. They form an Odd Friendship, which starts to border on romance.Tropes featured in Car Share:
Advertisement: