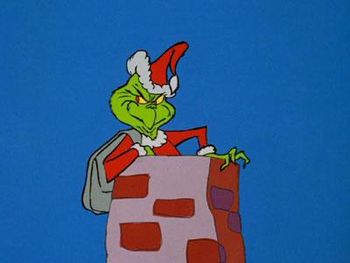 Pictured: A three decker sauerkraut and toadstool sandwich with arsenic sauce.
"Every Who down in Who-ville
Liked Christmas a lot...
But the Grinch,
Who lived just North of Who-ville,
Did NOT!"
— Dr. Seuss, How the Grinch Stole Christmas!
Advertisement:

There would appear to be no shortage of things to like about Christmas: presents, family, at the very least a little time off from work or school. Who could possibly have any objections toward this most hallowed of holidays?

The Grinch, that's who. This character flat-out hates Christmas, and they'll keep on kicking Christmas-themed dogs until everyone knows it. Usually, when it's revealed exactly what this person has against Christmas, it will turn out to be either something completely petty (like having never gotten a gift they wanted) or something downright tragic (like losing their parents on Christmas).

Though occasionally Truth in Television, the Grinch is primarily found in Christmas-themed movies, specials, and episodes, especially the innumerable retellings of A Christmas Carol. The character's role in the story may be that of a protagonist or antagonist, but in any case you can bet they will change their ways when the The Power of Friendship throws out An Aesop that teaches them the True Meaning of Christmas before the closing credits roll.

In a more general sense, the Grinch is any character who is utterly disgusted with something almost everyone else enjoys, and whose alienation drives them to be so completely unhappy that they finally decide to spread the misery around.

Comparable to (and frequently overlaps with) the Hollywood Atheist, in that the Grinch's hatred of Christmas will usually be due to some Dark and Troubled Past, their feelings about the holiday will make them grumpy and unpleasant, and they will inevitably change their ways by the end.

Real Life versions will often be fond of Anti-Christmas Songs. See also Crappy Holidays, for works that actually take the Grinch's viewpoint. If the Grinch follows his namesake to its Whole Plot Reference conclusion and actually steals the holiday, you have How the Character Stole Christmas.

See also The Scrooge, another character who is usually a Christmas hater, but tends to just ignore the holiday rather than actively try and ruin it for everyone else. Compare Fun-Hating Villain and Evil Cannot Stand Cuteness. Contrast with The Anti-Grinch, who loves Christmas, but ends up nearly destroying it (the Grinch's core goal), albeit unintentionally.

For the animated feature film adaptation of the Trope Namer, see The Grinch (2018).

Tom hates everything having to do with Christmas and take great delight in ruining it for everyone else.

Tom hates everything having to do with Christmas and take great delight in ruining it for everyone else.