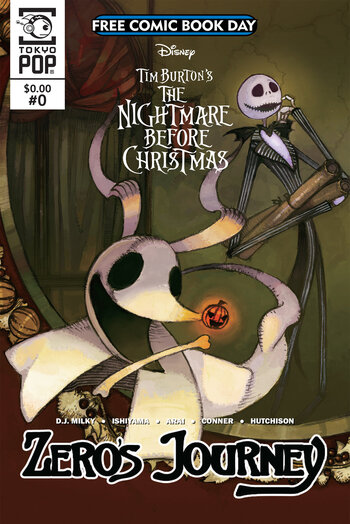 An official, Tim Burton-approved sequel to The Nightmare Before Christmas, Zero's Journey is a manga released in 2018 by Tokyopop. It concluded in May 2020.

The adventure continues as Jack, now having knowledge of other holidays outside his own, tries to create a portal that will allow immediate access to any holiday. While trying to get it to navigate, Jack takes a break to play fetch with Zero, but a mishap with the portal sends the ghost dog through the graveyard, into the forest, and hurtling straight into Christmas Town!

After a town-wide search for the missing pup, Sally realizes where Zero has gone, and rushes back to town to inform Jack. Jack wants to go get Zero himself, but being the Pumpkin King, he is needed to attend a large Halloween planning meeting to ensure this year's Halloween goes smoothly. After a suggestion from the Mayor to send someone else to look for Zero, it comes to light that Jack isn't the only one who's been to Christmas Town: Lock, Shock, and Barrel have, as well.

Promising to make it up to Jack after bringing Sandy Claws to Oogie in the original film, the trio head to Christmas Town to find Zero and bring him home. Fingers crossed for their success.