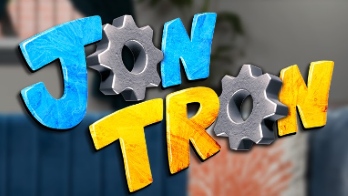 Jonathan Aryan Jafari (born March 24, 1990) is JonTron, a video game critic on Polaris. Using a cheerful, energetic style and plenty of cutaway gags and visual puns, he talks about a variety of topics.

He was a founding member of Game Grumps (as "Not-So-Grump") but left in 2013 to focus on his own endeavours, and along with PeanutButterGamer, he is one of the co-founders of the resurrected Normal Boots

His channel started out covering mostly obscure and often awful games. His sidekick was a green cheek conure named Jacques, who talked in a vaguely robotic voice, had glowing red eyes, and offered stoic commentary to contrast Jon's boundless energy. Crucially, he avoided games exhaustively covered by other reviewers (with a few exceptions from the NES era), focusing rather on early polygonal titles from "gaming's adolescence"; in a sense, Jon could be considered a newer generation of Internet critic.

In his earlier videos, he was rather serene, criticizing games with little to no anger or emotion, but became considerably more outgoing and energetic as the series went on (with Unfazed Everyman moments to lead the reviews along). It wasn't until towards the end of the first season when Jon began to develop this style and also started becoming notably more popular, with his reactions making for heavy Memetic Mutation.

The lengthy hiatuses between uploads, mostly caused by his involvement in Game Grumps, became the center of a Running Joke among fans, but to his credit, Jon maintained a steady upload schedule in 2014 before putting the show back on hiatus in 2015 to make way for a nine-episode miniseries named StarCade, an extensive look at nearly every Star Wars game ever made with a notably bigger budget aided by a partnership.

Shortly after the miniseries' conclusion (around mid-2016), JonTron notably diversified its content, branching out from games to lampooning bad movies and miscellaneous topics from workout videos to American history.

On April 22nd, 2019, Jon uploaded the first episode of a new animated series, titled JonTron's Happy Hour. It's a show in the form of a podcast, featuring Jon himself, Sergei Torres, Andrew Reynoso, and Mike Shayne. It is paired with animation with an artstyle reminiscent of The Ricky Gervais Show.

Jon was also inducted into Channel Awesome, specifically the gaming-centered Blistered Thumbs, and once had a second channel JonTronLoL

, where he casted League of Legends games with all his characteristic energy.

It's also worth noting that with the sixth StarCade episode, a fan started a since-defunct channel called GreenBoys

that takes Surreal Humor to new highs. Although this channel has no actual relation to Jon, it was inspired by a gag in the episode.

Not to be confused with ProtonJon.

What the FUCK is a Sonic?!