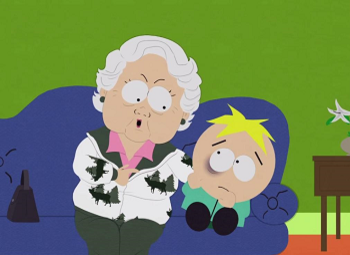 And you thought his parents were bad!
Advertisement:

When it comes to family drama, a parent can be a real pain. Maybe a straight-up Archnemesis Dad or Evil Matriarch. But sometimes the parents are fine; it's the grandparent that's a problem. An Evil Old Folk who for whatever reason has it out for their grandson or granddaughter. Perhaps they were abusive to their own children and they haven't changed their ways with the next generation. Or maybe they want to avert some sort of prophecy by offing the grand-offspring.

If one's own parent is still abusive or antagonistic, this might be why they're not good parents. Or perhaps if the protagonist has Good Parents, it's in response to the grandparent. Compare Wise Old Folk Façade, an elderly character who acts as a kindly grandparent figure to someone but is actually manipulating them for evil purposes.

The grandparent being nasty might be what spurs the parent or Cool Uncle into Breaking the Cycle of Bad Parenting. If there's a Big, Screwed-Up Family, expect this type of grandparent to be the start of it. Contrast Doting Grandparent, who are loving and affectionate to their grandchildren.