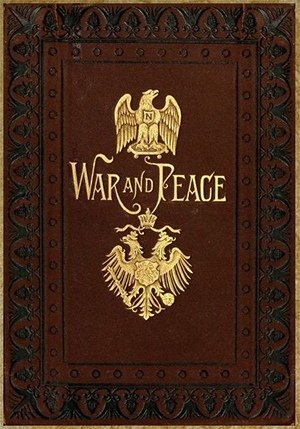 “‘Nothing has been found out, nothing discovered,’ Pierre again said to himself. ‘All we can know is that we know nothing. And that’s the height of human wisdom.’”
Advertisement:

War and Peace is a novel by Leo Tolstoy, about the affairs of a number of interconnected Russian nobles during and after The Napoleonic Wars.

It is the year 1805. Napoleon Bonaparte has installed himself as Emperor of France, and he makes war on Austria and Russia in his bid to establish France as the supreme nation on Earth. In Petersburg, Pierre Bezukhov, the illegitimate son of Count Kirill Vladimirovich Bezukhov, attends a soirée at Anna Pavlovna's, a lady in waiting to the Russian empress. On St. Natalya's Day, guests gather at the Rostov mansion at Otradnoe to pay their respects to Countess Rostova and her daughter Natasha. Some days later, Prince Andrei Bolkonsky declares to his father that he is going to join the Russian military and achieve glory, just as Napoleon did...

Meanwhile, Princess Drubetskaya approaches Prince Vassily Kuragin at Anna's soirée to ask a favor in getting her son, Boris, into a high, safe position in the military. The children at Otradnoe play after-hours, and Childhood Marriage Promises arise. Andrei leaves behind his pregnant wife with his father and sister while he goes out looking for glory in battle. Also, three drunk ruffians tie a policeman to a bear and throw both of them off a bridge into the river.

And those are just the introductory chapters.

Famous for its massive size, alleged unreadability and being considered one of the greatest novels ever written. Also considered to be brilliant as a paperweight. Or for whacking someone across the head if you need to...

Note: Due to a version of Spell My Name with an "S", translations over the years have listed the character names with minor differences in spelling, and this is reflected in some examples on the wiki. For example, Maria=Marya or Mary, Nikolai=Nicholas, Andrei=Andrew, and so on.

The book was adapted to film several times. The 1956 American version, directed by King Vidor, starring Audrey Hepburn as Natasha and Henry Fonda as Count Bezukhov, cut out a lot of things so it was "only" 208 minutes long. The Soviet version made in the 1960s by Sergei Bondarchuk (who also starred as Pierre) was more accurate. It was released in four parts in 1966 and 1967, with a total running time of 431 minutes. With inflation taken into account, it's the most expensive film in history.

It has also been adapted for TV a number of times, including BBC adaptations in 1972 and 2016. The former starred Anthony Hopkins as Pierre Bezukhov in a cast that also included Colin Baker as Anatole Kuragin. For tropes exclusive to the latter, see War and Peace (2016).

A small section of the story was turned into a musical, Natasha, Pierre, and the Great Comet of 1812, in 2012.

This book provides examples of (Unmarked spoilers ahead):

Tropes unique to the 1972 BBC Series:

Tropes unique to the 2007 TV Mini-Series: