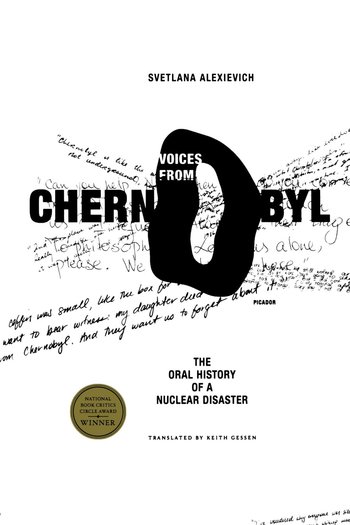 Voices from Chernobyl: The Oral History of a Nuclear Disasternote known outside the US as Chernobyl Prayer: A Chronicle of the Future is a collection of first person accounts of the ongoing effects of the explosion at the Chernobyl Nuclear Power Plant, compiled by Belarusian journalist Svetlana Alexievich. It was first published in Russian in 1997, eleven years after the accident.

The accounts were collected over three years from hundreds of survivors of the disaster—including the relatives of first responders, evacuees from Pripyat and the Exclusion Zone, liquidators conscripted to help with the cleanup, and re-settlers who returned to live on the contaminated land. They are presented as "monologues," minimally edited, with occasional notes from the author in the style of stage directions. Some chapters consist of quotes from multiple subjects, interspersed, but all are credited by name except where they request otherwise.

The book won the 2005 National Book Critics Circle Award (for the English translation) and was a major factor in Alexievich's reception of the Nobel Prize in Literature in 2015.

Works inspired by accounts in Voices from Chernobyl:
Advertisement:

Although not a work of fiction, this book provides examples of: