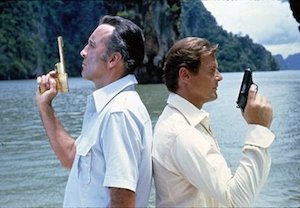 In a Duel to the Death involving guns, two characters stand back to back, walk ten paces and then see who can draw the fastest.

Except it doesn't usually go like that. One of them will a) leg it, b) fall into a pond c) duck or d) prove their cowardice by turning early and trying to shoot their opponent In the Back. If it's a comedy, the person counting out the ten paces may just keep going, with the combatants ending up several miles apart.

Actually almost never used in real duels. Most started with combatants at the prescribed distance, with one or two lines in front of them that they were not allowed to cross. Depending on the agreed rules you might be permitted to advance to your "barrier" but once you fired you had to stand still until your opponent fired.

Though, under the Irish Code Duello of 1777, either version was allowed and did in fact take place, with the walk-to-your-mark-and-fire version done by the ones who really didn't want to kill the other - it gave both opponents a chance to think it over, and often resulted in the practice of "deloping" - firing to miss, in order to declare satisfaction and end the duel before you drew your opponent's blood. Bystanders and seconds often were the losers here.

Much less formal examples of stand, quick-draw, fire often show up under Showdown at High Noon.

A variation is "drew their swords and shot themselves".

Since both are falling behind in the airsoft battle, Garrett offers Cody a 'Western-style shootout'... and promptly suckers him into a trap by turning early.

Since both are falling behind in the airsoft battle, Garrett offers Cody a 'Western-style shootout'... and promptly suckers him into a trap by turning early.