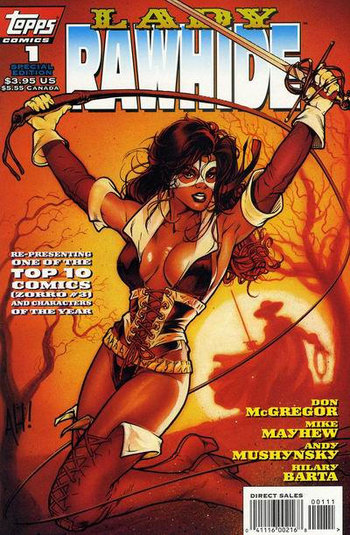 Lady Rawhide is a scantily-clad, masked vigilante who defends the people from their oppression against tyrannical officials and other villains. She first appeared in Topps Zorro series, and later appeared in several solo one-shots and two mini-series. Lady Rawhide was created by Don McGregor and Mike Mayhew.

In 2013, a new 5-issue mini-series came out from Dynamite Entertainment.

Anita Santiago was driven to create her own costumed identity to seek revenge against the Commandante of Los Angeles, Captain Enrique Monasterio who inflected terrible injures on her brother, Roman Santiago. Anita's hatred for Zorro came about when her brother, Roman, was falsely mistaken as being Zorro by the nefarious Captain Enrique Monasterio who shot Roman point black which ended up permanently blinding Roman, and disfiguring the left half of his face. Since then, Anita swore that she would make Zorro pay with his life.

What seemed like a simple task for vendetta became more complicated after she met her adversary that she eventually fell in love and came to respect what Zorro stood for. She would eventually adopt his goal to fight injustice and help the helpless against the wicked and corrupt.