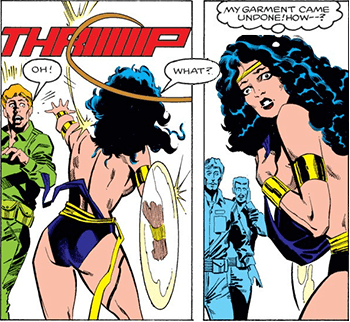 Let 'er rip!
Mae: What if at a key moment in the game my, my uniform bursts open and, uh, oops, my bosoms come flying out? That, that might draw a crowd, right?
Doris: You think there are men in this country who ain't seen your bosoms?
— A League of Their Own
Advertisement:

Clothing Damage is when clothes get torn off during combat. This type of Fanservice is more generally when clothing rips or falls off in non-combat related situations.

The Theiss Titillation Theory says that outfits which "merely suggest the imminence of revelation" are teasingly sexy. If it looks like Victoria is one stiff breeze away from having all of her secrets revealed, it will certainly get your attention, if only out of morbid curiosity. But the allure is all in the teasing: it looks like we'll see something, but we never do. When the hinted-at revelation accidentally comes to pass (universally to the embarrassment of the victim and the enjoyment or amusement of everyone else), the tease is over. And you get this trope.

This is common to outfits that are impractical and/or prone to falling off such as swimsuits, stripperiffic clothing, towels, robes, loincloths, dresses, gowns and skirts. When caused by some machine or magic specifically designed to achieve that effect, see The Nudifier, if caused by some form of shapeshifting see Shapeshifting Excludes Clothing. Witnesses and gawkers are usually targets for an Unprovoked Pervert Payback. A Shameless Fanservice Girl might not care about suffering a wardrobe malfunction and an Attention Whore might even engineer it for the attention.

A Super-Trope to All Cloth Unravels (clothes unraveling from a single thread), Open-Fly Gag (leaving the zipper undone), Popping Buttons (when buttons pop away from the clothes), Slippery Swimsuit (losing your swimwear in the water) Splitting Pants (pants or similar garments rip from strenuous movements and/or being too small for the wearer) and Stripping Snag (clothes get snagged off when caught in something). See also Dress Hits Floor if the malfunction causes the clothes to pool at their feet. Compare Defeat by Modesty, Pants-Pulling Prank, Right Out of My Clothes, Shameful Strip, Undressing the Unconscious, and Wardrobe Wound. Contrast Sexy Coat Flashing. May cause a Comedic Underwear Exposure or Naked Freak-Out. A Fan Disservice version might be Plumber's Crack.