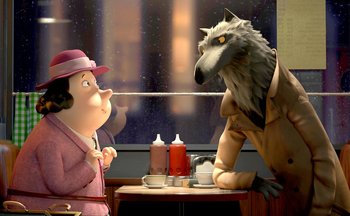 "I'm waiting to meet an old friend."
The Wolf: Happily ever after. Hmpf!
Miss Hunt: Come on now. They're just stories. You know...for children? Don't suppose you have family yourself?
The Wolf: Well had. I had two nephews, Rolf and Rex.
Miss Hunt: Had? Why, what happened?
The Wolf: Well, since you asked. Once upon a time...

Revolting Rhymes is a 2016 BBC animated short film (28 minutes) based on the Roald Dahl book of the same name released in 2016. Animated by Magic Light Pictures and narrated by Dominic West, it was released in two parts and retells five of the original book's six poems in a single interweaving story.

Our story begins on a rainy night in a small cafe. A wolf enters and asks to sit with the lone customer for some polite conversation. Initially wary, the woman is soon put at ease by his demeanour. Once they begin talking, Miss Hunt reveals she is killing some time before babysitting and the Wolf takes notice of the fairy tales book she's brought with her for the children. He takes issue with the liberties the book has taken with the source material and their sappy happy endings. When Miss Hunt points out the stories are just for children, she inadvertently learns the Wolf had lost two of his own nephews and at her request he begins to explain how.

The Wolf's story and his narration serve as a Framing Device to the five poems being adapted. The first half of tales are directly tied to him due to the fate of his nephews. The second half of tales are not tied to the Wolf personally but he does share a connection to his audience. Whom he intends to eat to avenge his nephews and punish Red Riding Hood.

Part 1 interweaves the stories of Snow White, Little Red Riding Hood, and The Three Little Pigs; it was nominated for an Academy Award for animated short film. Part 2 tackles Cinderella and Jack and the Beanstalk, and includes the resolution to the Framing Device.

And now the old wolf's plan becomes clear - to devour those his old enemy holds dear.