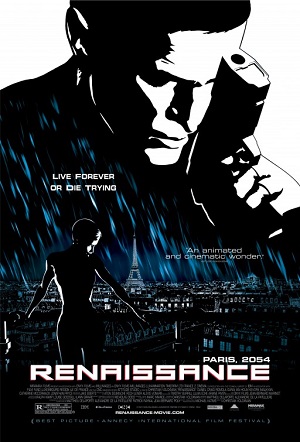 Renaissance is a 2006 French CGI animated science-fiction film featuring the voices of Daniel Craig, Ian Holm, Jonathan Pryce, and Catherine McCormack. Set in Paris in 2054, it follows inspector Barthelmey Karas (Craig) as he investigates the kidnapping of a brilliant young researcher named Ilona from the resident Mega-Corp, Avalon.

While the plot is relatively by-the-numbers, what makes this film stand out are the visuals. With one or two momentary exceptions, the entire film is animated in pure black and pure white, which makes for some seriously stunning sequences.