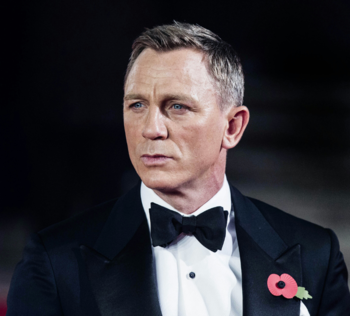 The name's Craig. Daniel Craig.
"I've always loved to dress up a bit and show off."
Advertisement:

Daniel Wroughton Craig CMG (born 2 March 1968 in Chester) is an English actor. His career took off with appearances in the classic Mini Series Our Friends in the North and Sharpe, and movies such as Elizabeth and Layer Cake, but he's since become best known for one particular role...

Chosen by producer Barbara Broccoli for the role in the 2006 reboot of the franchise, Casino Royale, he reprised it in 2008's Quantum of Solace, 2012's Skyfall, 2015's Spectre and 2021's No Time to Die. He was also used as the design base and voice of Bond in Blood Stone, the Quantum of Solace tie-in video game, and the remake of the GoldenEye 007 game for the Wii. He also escorted none other than HM The Queen in a short film for the London Olympics opening ceremony. Having played Bond for 15 years, his tenure has chronologically surpassed that of the previous longest, Roger Moore, whose tenure lasted 12 years (though Moore starred in seven Bond films while Craig starred in five, since Eon Productions notoriously slowed down their film output).

Despite being known primarily for Bond, Craig has had major roles in a number of other films, including Angelina Jolie's love interest / rival in Lara Croft: Tomb Raider (2001), Irish mobster Conner Rooney in Road to Perdition (2002), Afrikaner Mossad team member Steve in the Spielberg directed Munich (2005), Lord Asriel in the film adaptation of The Golden Compass (2007), Dr. Ben Driscoll in The Invasion (2007), Jewish resistance leader Tuvia Bielski in Defiance (2008), protagonist Jake Lonergan of Cowboys & Aliens (2011), journalist Mikael Blomkvist in the David Fincher adaption of The Girl with the Dragon Tattoo (2011), Mr. Sakharine / Red Rackham in the Dream Production Team motion capture film adaption of The Adventures of Tintin, Deep South Demolitions Expert Joe Bang in Logan Lucky and gentleman sleuth Benoit Blanc in Knives Out.

He also has had a long and healthy career as a stage actor, including playing Joe in the Royal National Theatre's production of Angels in America in addition to starring in Broadway productions of A Steady Rain (opposite Hugh Jackman), Harold Pinter's Betrayal and some Shakespeare plays.

Also, Craig is one of us, being a self-described "old hand Trekkie", as well as being a fan of Firefly and, of course, Doctor Who. It was also his idea to have "Orinoco Flow" playing over a certain key scene in Dragon Tattoo.

Daniel's second wife is Rachel Weisz since June 2011. They have a child since 2018. Both of them also have American nationality, although Craig was naturalized in 2019 in part due to his wife being a naturalized American in 2011.

On an unrelated sidenote, it's been shown as canon that he is Buffy and Faith's fantasy guy.