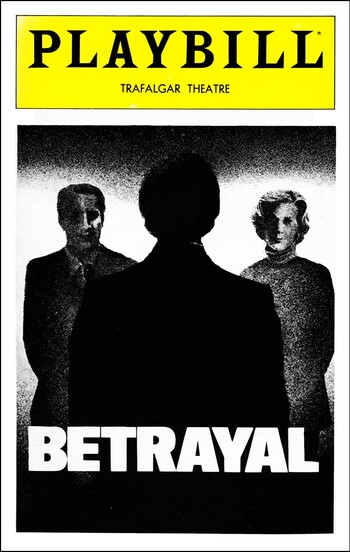 Betrayal is a 1978 play by British author Harold Pinter, considered one of his best and most influential works — and, indeed, one of the most influential plays of the 20th century. Its most notable stylistic device is its Back to Front structure: it begins with ex-lovers Emma and Jerry meeting in a pub in spring 1977, and ends with Jerry's first declaration of his adoration for Emma at a party in winter 1968. As you might imagine, this structure builds in a great deal of Dramatic Irony; it's disillusioning and depressing to see Jerry and Emma flirting in the final scene when you know just how dysfunctional the ensuing relationship is going to be.

The only other character (aside from a waiter who appears in one scene) is Robert, Emma's husband and Jerry's (alleged) best friend. Judith, Jerry's wife, is mentioned frequently but never appears. The play's style is generally minimalist: besides featuring only three real characters it has few dramatic set pieces, uses economical dialogue, and is usually staged quite sparingly. However, this does not prevent Pinter from using liberal and complex symbolism.

The title refers most obviously to Emma and Jerry's sleeping together for seven years behind Robert's back, but that's only one of many betrayals in the play. The characters lie almost constantly not only to each other but to themselves.

Pinter wrote the play while having an affair with the historian Antonia Fraser, but claims that it was actually based on another of his long-running extramarital affairs, with the TV presenter Joan Bakewell.

A film of Betrayal was made in 1983, directed by David Jones and starring Ben Kingsley as Robert, Jeremy Irons as Jerry, and Patricia Hodge as Emma. Pinter, a screenwriter as well as playwright, wrote the adaptation himself.

Tropes found in Betrayal include: