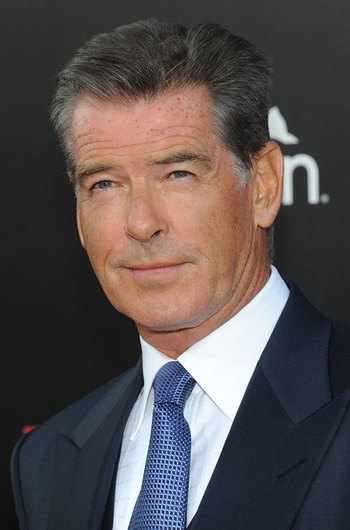 The textbook definition of suave
"James Bond is one of those heroes that all guys feel they could actually be like."
Advertisement:

Born in County Louth, Ireland, Brosnan spent the first eleven years of his life in Navan, County Meath. Brosnan was an only child. His mother worked in London as a nurse to provide for him, seeing him only once or twice a year. His biological father abandoned the family when Brosnan was a baby, so he was raised by various relatives and at a boarding house. By the age of eleven, Brosnan moved out of Ireland to live with his mother and her new husband, first living in Scotland and then going on to live in London, where Brosnan would live until his late twenties (losing his natural Irish accent in the process). One of the first films his new step-father took him to see was Goldfinger, which left an indelible impression on him.

One of Brosnan's first film roles was as an IRA hitman in the film The Long Good Friday. Following this and several other small roles, including the film The Mirror Crack'd alongside Elizabeth Taylor and Rock Hudson, and a small part in an episode of Hammer House of Horror, Brosnan moved to America to pursue a film career, eventually landing the lead role in Remington Steele. Throughout his tenure on Remington Steele, Brosnan was often thought of as the perfect actor for a very high-profile role...

He was offered the role twice, first in 1986 for The Living Daylights, which he had to turn down due to contractual obligations with Remington Steele's producers. He finally got to play Bond in GoldenEye, to great acclaim even before the film was released, and three films (Tomorrow Never Dies, The World Is Not Enough and Die Another Day) would follow. His first wife Cassandra Harris played Countess Lisl van Schlaf in For Your Eyes Only, saying even then that he'd be perfect as Bond. Sadly, she didn't live to see it happen, passing away in 1991. Brosnan was then let go of the franchise in 2005 as the producers felt a fresh start was needed.

Brosnan seems to particularly like playing flawed spies and thieves, but he's had plenty of other kinds of roles, not always with the suave sophistication he is noted for. Many sources have referred to him as a next generation Cary Grant, alongside George Clooney.

He has an honorary OBE for his contribution to the British Film Industry, however he's ineligible to receive the full OBE honour as he's not a citizen of the Commonwealth realms (despite having lived in UK for nearly twenty years, he never applied for citizenship there). Brosnan became an American citizen in 2004.