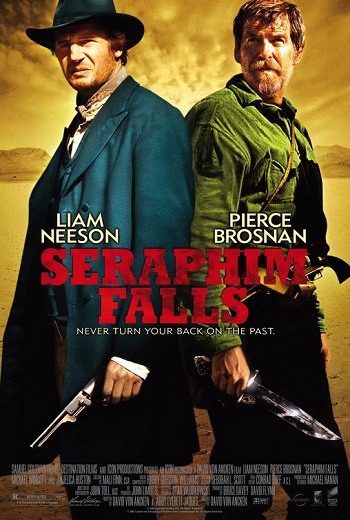 "Only the dead know the end of war."
— Carver, quoting Plato
Advertisement:

A 2006 cult western which boils down to 90 minutes of Liam Neeson chasing Pierce Brosnan across the wilder parts of Nevada.

An unknown event during the final days of the American Civil War has made captain Gideon, who fought for the Union, the arch-enemy of ex-Confederate colonel Carver. Now Carver is out for revenge. He's gathered a team of mercenary trackers and they've managed to pick up Gideon’s trail. However, at first Gideon doesn't actually know why he is being chased; the viewer follows his struggle to stay alive as he begins to understand what horrible part of his past has come to haunt him.

The movie starts out as a straightforward manhunt, but gradually takes a more philosophical turn. Its surreal final scenes decidedly make it stand out from the average western or revenge movie (and some of their significance will only be apparent to those who are really paying attention).