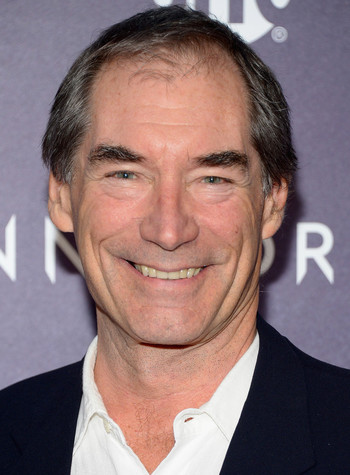 A Time Lord, a chief, an evil 1930s movie star, a toy hedgehog, and of course, a secret agent with a Licence to Kill.
"I don't think anyone except the few people who have played James Bond can tell you how strange and special it is and how much your life changes."
Advertisement:

He has done Shakespeare for the Royal Shakespeare Company, was Philip II in The Lion in Winter, played a supermarket manager in Hot Fuzz, Prince Barin in Flash Gordon, Neville Sinclair in The Rocketeer, Heathcliff in a 1970 adaptation of Wuthering Heights and Rochester in a 1983 adaptation of Jane Eyre. He played Hercules' adoptive father Amphitryon in Hercules. He voiced Mr. Pricklepants the toy hedgehog in Toy Story 3 and played a deliciously nutty villain in Chuck. He appears in the Doctor Who story "The End of Time" as Rassilon. David Tennant and he "sang" each other's theme tunes on set. He also played Sir Malcolm Murray in Showtime's Penny Dreadful. He even voiced Sparrowhawk in the English dub of Tales from Earthsea.

OK, we've got to mention it eventually. He played James Bond twice in the late 1980s, in The Living Daylights and Licence to Kill. His serious take on the role, based on the books' portrayal of the character divides Bond fans to this day - some love him, some hate him. What cannot be denied is that until Daniel Craig showed up he certainly had the most grounded and serious take on the role.