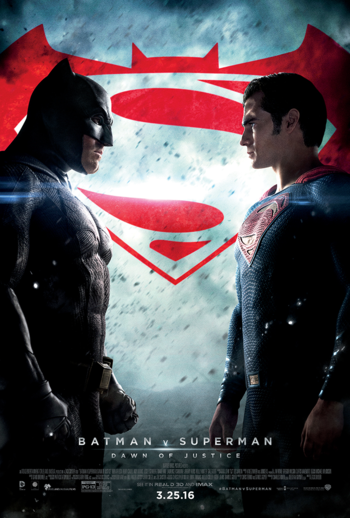 "Everything's changed. Men fall from the sky. The Gods hurl thunderbolts, innocents die."
"Black and Blue. Fight Night! The greatest gladiator match in the history of the world. God versus Man. Day versus Night. Son of Krypton versus Bat of Gotham."
— Lex Luthor
Advertisement:

Batman v Superman: Dawn of Justice is a superhero film, the 2016 sequel to Man of Steel directed by Zack Snyder, and the second film in the DC Extended Universe. It was written by Chris Terrio and based on a story by David S. Goyer and Zack Snyder.

Two years after saving humanity from destruction, Clark Kent/Superman (Henry Cavill) has taken his place as an icon and hero that makes the planet a safer place to live. But many still distrust the "Man of Steel", after the damage his battle with General Zod wrought on Metropolis. Fearing the destruction a godlike and now unrivaled superhuman could cause if he ever turned against those he protects, billionaire philanthropist Bruce Wayne (Ben Affleck), who fights crime as the vigilante Batman, has focus on preparing. His goal: destroy Superman and his apparent hidden schemes, whatever the cost.

But not all is as it seems, as corporate mogul and prominent Metropolis citizen Lex Luthor (Jesse Eisenberg) secretly engineers a war between Metropolis' Man of Steel and Gotham's Dark Knight.

Before the film was released it was announced that there would be a Director's Cut called the "Ultimate Edition", as the theatrical version was trimmed from an R-rating for some sequences of violence that were deemed too harsh for a PG-13 rating (which is what Zack Snyder was aiming for; he was actually surprised when the MPAA re-rated the longer version of the film). The Ultimate Edition is over half an hour longer, features an expanded story and includes Jena Malone after her character Jenet Klyburn was cut from the theatrical version.

The story is continued in both 2017's Justice League and 2021's Zack Snyder's Justice League, the latter being the true sequel that was envisioned by the crew that made Man of Steel and Batman v. Superman.

open/close all folders
Tropes A to E
Tropes F to K
Tropes L to M
Tropes N to P
Tropes Q to S
Tropes T to Z
"Men are still good. We fight, we kill, we betray one another, but we can rebuild. We can do better. We will. We have to."
Feedback