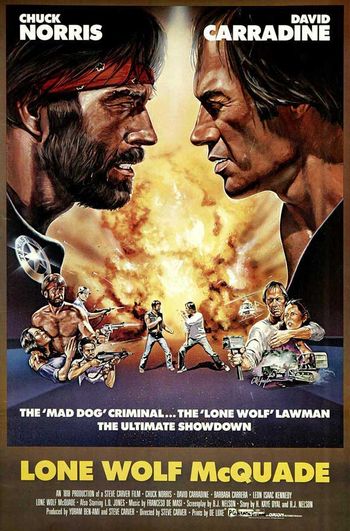 I tried squinting. I still only see a vase!
Advertisement:

A stock pose seen in cartoon openings, movie posters, video game box art, comics covers, paintings, this is a shot that pits two teams against each other on opposite sides of the screen. It can be a massive group shot, featuring all the series's heroes and villains, or show just two characters— all that matters is that the two sides are facing each other and look ready to strike.

Usually the left and right side are evenly balanced and evenly matched. The characters across from one another tend to be counterparts and are often mimicking the other side's pose, and suggesting Counterpart Combat Coordination.

This trope can be used for thematic reasons, to emphasize how the characters aren't so different and the villain is the dark mirror of the other, but it's just as likely to be a dynamic version of the Team Shot with villainy added for spice.

A variant often seen in fight scenes involves a stationary long shot framing two groups running at each other into combat, often one-on-one as a Counterpart Combat Coordination. Usually they don't start fighting all at once, rather, it starts in the back or front of the line and moves to the other side from there.

Compare Juxtaposed Halves Shot (where half of two characters' sides/faces are juxtaposed to or beside each other), Fearful Symmetry (where both characters involved are usually shown in profile in an ongoing Blade Lock), and Versus Character Splash (where two characters' faces are briefly shown in a Splash Screen as a prelude to a battle in a Fighting Game).