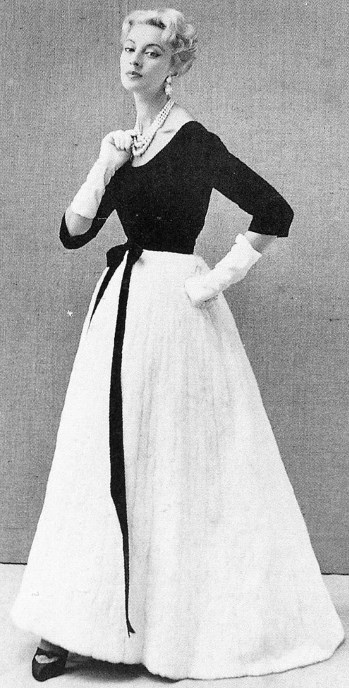 How does her pose show off this ballgown?* AKA Balmain gown. Answer:  The hand on her hip accentuates the dress silhouette. Her other hand highlights her pearls and gloves. She's holding her leg forward on tiptoe, to both emphasize her white ermine skirt, and make one of her Nice Shoes visible. Her confident expression says "You'll feel like an empress in this dress. It is for the truly stylish and sophisticated".
Advertisement:
"Quick. Photo pose off."
— Spoony & Linkara review Warrior #4

Modeling, whether clothes or other products, use specific moves and stances to make those products look good. All those various poses are actually ways to draw the eyes of potential customers. This has become so prevalent that people will often unconsciously pose when trying certain products (particularly women trying on fancy dresses).

What poses are done will depend on the product, and other factors. So when a Hood Ornament Hottie is posing, it will always be in ways that highlight the car. She may just touch it, lean against it, outright drape herself over it, or at the very least point to it in some way. When shows have certain products that fit in the hand, the model may hold it up while making gestures directly around the item to keep our eyes on it.

When it comes to being a Fashion Model, the poses may vary not only according to the outfit but also depending on whether they are posing for just one picture or more. If there are multiple pictures, or a Fashion Show, then the model will easily be able to show the whole outfit. If there is one picture, like an ad in a Fashion Magazine, then the poses will be more elaborate in order to highlight as much of the outfit as possible. This is also why store dummies are arranged in poses.

In fiction the purpose of these poses is often lost, and it's just fun to have people making silly poses, even when they are still modeling.

This frequently overlaps with other pose tropes:

A Sister Trope to Notice This.

See also Model Couple (who often pose together, in addition to physically complementing each other).

Compare/contrast Too Incompetent to Operate a Blanket (the actors visually try to make products look as bad as possible).