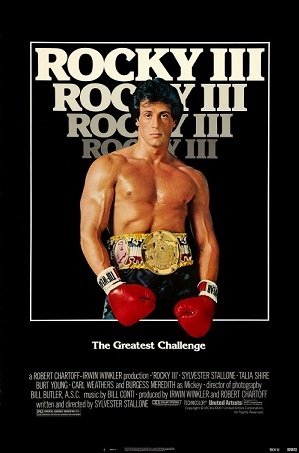 "So many times it happens too fast
You Trade Your Passion for Glory
Don't lose your grip on the dreams of the past
You must fight just to keep them alive!"
— Survivor, "Eye of the Tiger"

The one where Rocky fights Hulk Hogan and Mr. T.

Rocky III is a 1982 American film written and directed by, and starring Sylvester Stallone as the title character; the third installment in the Rocky film series.

At the end of Rocky II, underdog Rocky Balboa defeated Apollo Creed to become the heavyweight champion of boxing. Five years and ten title defences later, Rocky's reign remains intact and he has become a major celebrity, though at the cost of becoming complacent.

In a reversal of Rocky and Apollo's roles in the first film, Rocky is challenged by a young up-and-comer named Clubber Lang (Mr. T). Rocky neglects his training compared to the passionate and aggressive Lang, and quickly loses the title in a stunning and decisive upset.

Forced to confront his own failings and the sudden death of his beloved trainer Micky, Rocky falls into depression until he is approached by the now-retired Apollo Creed. Apollo wishes to settle a grudge with Lang by training Rocky for a rematch, instilling Rocky with the technique and expertise that characterised Apollo's ability as a highly-trained and well-rounded fighter. The two rivals bond throughout their training and become close friends, leading to a final climatic showdown with Clubber Lang.

This was the film debut of Mr. T; and of professional wrestler Hulk Hogan, as the supporting character "Thunderlips". The film's main theme "Eye of the Tiger", was written by the group Survivor and became a smash hit single, topping the U.S. Billboard charts and received an Academy Award nomination for Best Original Song.

The fourth installment in the series, Rocky IV, was released on 1985.

Rising up, straight to the top
Had the guts, got the glory
Went the distance, now I'm not gonna stop
Just a man and his will to survive!