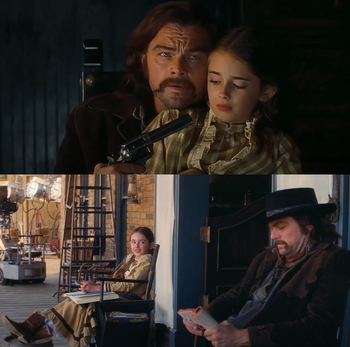 "That was the best acting I've ever seen in my whole life."
"I want y'all to meet Frank Schultz. Mr. Schultz is the villain of our play, but off the stage he's meek as a lamb and wouldn't hurt a fly."
— Andy, Show Boat
Advertisement:

The inverse of Nice Character, Mean Actor — the guy playing the Big Bad, the badass or the For the Evulz Evil Overlord is, off-camera, the nicest, sweetest person you'll ever meet. Maybe they were previously pigeonholed into nice guys roles and they're relishing the chance for Playing Against Type; maybe they're in it for the Money, Dear Boy; maybe they're the resident Large Ham and they just like playing deliciously evil characters; or maybe they have the Face of a Thug and got cast because they look big and scary (despite being anything but). And when you think about it, villains — especially in genre fiction — tend to lose a lot, only exist for the primary characters to play off of, and often end up looking ridiculous. It's not a career path that necessarily goes with actually being an arrogant or selfish actor; if anything, truly egotistic actors tend to hate playing the villain.

Contrast Nice Character, Mean Actor. Compare Monster Façade, where a creature with scary looks but nice personality puts on a mean act, for other purposes than entertainment.

Due to the Roleplaying nature developed by the players in ALfheim Online, this trope is in effect.

Due to the Roleplaying nature developed by the players in ALfheim Online, this trope is in effect.