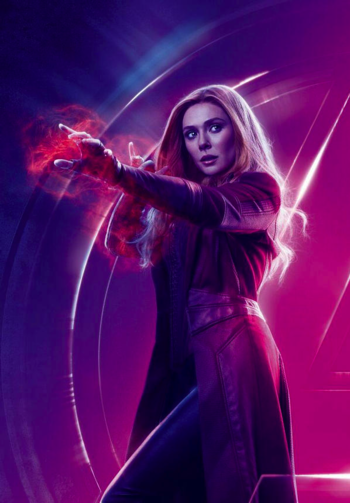 "Thanks for the lesson. But I don't need you to tell me who I am."
Click here to see her as the Scarlet Witch 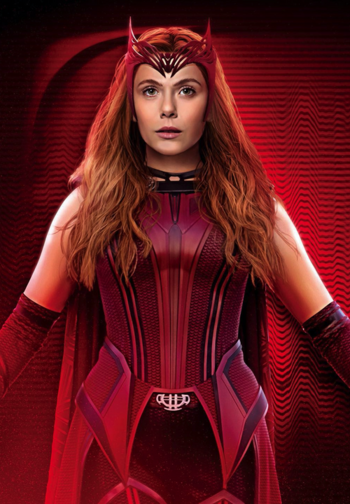 "I used to think of myself one way. But after this... I am something else. I'm still me, I think, but... that's not what everyone else sees."
Advertisement:

An angry young woman whose parents were killed in an explosion in her homeland of Sokovia. Wanda herself would have perished if not for the fact that the second shell that hit her home did not go off. Forced to stare at the unexploded shell for two days, the words written on that shell burnt in her mind who would be held responsible for her tragedy: Stark Industries and the man behind it, Tony Stark. She and her brother Pietro subjected themselves to the experiments of Wolfgang von Strucker who, through the power contained within Loki's staff, amplified the twins and gave Wanda her magical powers of telekinesis and mental manipulation.

After Pietro’s death at the hands of Ultron, who the twins briefly joined forces with to fight the Avengers, Wanda ended up joining the Avengers and falling in love with the synthezoid known as Vision who was powered by the Mind Stone that gave her her abilities. 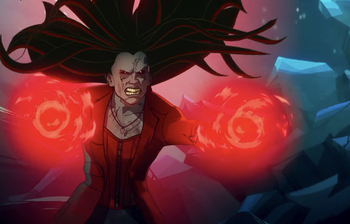 A Variant of Scarlet Witch who became zombified.

Why she up there all this time

Okoye asks the question about Scarlet Witch, and this trope is the answer.

Why she up there all this time

Okoye asks the question about Scarlet Witch, and this trope is the answer.