Pick on Someone Your Own Size 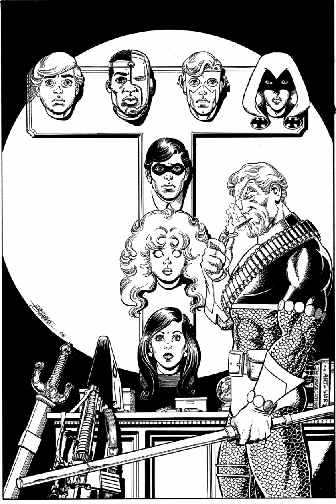 A situation where an adult villain fixates on a teenager as his Arch-Enemy because of some twisted logic that only makes sense to them. It's not a smart reason, but it's there, and it's convincing. It's not because of some past personal grudge, not Because Destiny Says So, not because he wants the hero's MacGuffin, and definitely not because Luke, I Am Your Father (Fan Fiction notwithstanding). Somehow, someone half their age has really gotten under the villain's skin, so the only thing they can do is return the favor. This trope may exist to ensure that the audience takes the villain seriously, rather than laughing it off as merely two kids fighting.

Prone to persuade the impressive hero "We Can Rule Together!"

Expect Not So Different and If You Kill Him, You Will Be Just Like Him.

Although most villains tend to focus on teen heroes of their own sex, intergender examples are more common than you might think, as many of the examples below show.

Often a sub-trope of Driven by Envy. The Dean Bitterman or Sadist Teacher can cross into this territory if they have it in for a specific student in particular. Naturally, if a series focuses a lot on the Get Up, Go to School, Save the World and/or Recruit Teenagers with Attitude Trope, bad guys like this will likely appear. See also: Animal Nemesis. Contrast Older Hero vs. Younger Villain, where the age relationship is reversed.