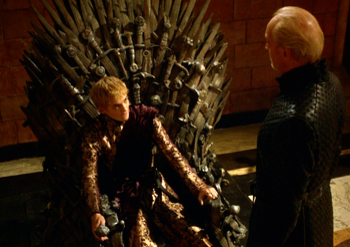 Power does not always sit on the throne.
"Any man who must say 'I am the king' is no true king. I'll make sure you understand that when I've won your war for you."
— Tywin Lannister, Game of Thrones, "Mhysa"
Advertisement:

The Dragon-in-Chief is a version of The Dragon who serves as the de facto Big Bad of the story, even if they're supposedly not the one in charge. They're nominally subordinate to another villain, but typically so much smarter, stronger or more skilful, and just as evil if not more so (and almost always scarier) that it's clear who's really the bigger menace. This character tends to have almost no respect for the Big Bad due to their comparative lack of vision, courage or common sense.

The supposed main villain, for their part, is relegated to Big Bad Wannabe as they seriously or even fatally overestimate The Dragon's loyalty, or are just too afraid of them to be able to keep them in line. The Dragon-in-Chief is not simply the main villainous driving force behind the plot, even if they did not initiate it, but they are such to the point that the Big Bad is pushed aside or even endangered by them, and rendered less important by comparison. The Hero treats, or comes to treat, The Dragon-In-Chief as the actual main villain of the story, and very often It's Personal with the Dragon.

The Dragon-In-Chief will typically think the Big Bad either lacks ambition, or is just an idiot. They may start off as junior partners in the Big Bad's business: after years of hard (but fun) living as a dangerous felon, they have found themselves steady employment with the Big Bad and hope to take over the business some day or retire on the fortune made from their latest Master Plan. This is when they start to complain about their master’s unambitious and/or just plain incompetent way of running things, though the Big Bad might retort that their way is from experience and The Dragon's ways will ultimately lead to ruin. Occasionally, their warnings turn out to be right. It is occasional that the Dragon-In-Chief truly is loyal to the ostensible Big Bad, but in occasions like these their superior is liable to be done in either before the Dragon-in-Chief is, or afterwards in a Post-Climax Confrontation.

The Man in Front of the Man is a related, but different trope where the position of the The Dragon as the actual Big Bad is kept hidden until The Reveal, thus The Dragon is less likely to act like a true Dragon-in-Chief in order to keep the jig up from the audience as well as the in-universe characters, including the supposed Big Bad, who might not be aware that they are being manipulated. The Dragon-in-Chief doesn't need this theatre, making their position as the true Big Bad clear from the start.

When a character fills this role because the Big Bad is merely physically absent from the main story, and/or not as important to the hero, then the superior is a Greater-Scope Villain (if the Dragon is operating entirely or almost entirely on their own).

See also Hyper-Competent Sidekick, Dragon Ascendant, The Starscream and especially the Big Bad Wannabe, whom Dragons-in-Chiefs usually work for. Compare/Contrast The Heavy, which is usually simply The Dragon to an off-screen Greater-Scope Villain, but not necessarily a Dragon-In-Chief in themselves.

Important Note: this does not simply refer to any Dragon that is physically superior to a Non-Action Big Bad or Greater-Scope Villain who can be dispatched with relative ease. Plenty of physically weak villains present far greater moral, psychological or other challenges to the hero and their actions drive the character arcs of the protagonists. note Darth Vader, for example, may be the main physical threat, but Emperor Palpatine is undoubtedly the one in control. It is these roles that must be supplanted for a Dragon to truly ascend to Dragon-in-Chief. Please be sure the character actually fits this criteria before adding them as an example.