It's Personal with the Dragon 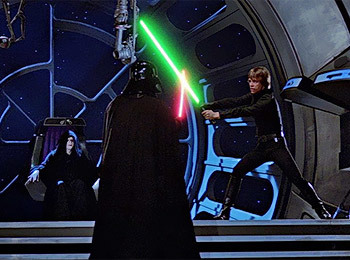 Emperor who? It's all about Luke vs. Vader.
Matrix: How much are they paying you, Bennett?
Bennett: They offered me a hundred grand. You want to know something? When I found out I'd get my hands on you, I said I'd do it for nothing.
— Commando
Advertisement:

In many stories, the Big Bad and The Hero have a very direct and immediate relationship. The big bad is personally responsible for all the hero's woes, burned down his hometown, killed his father, and even kicked the hero's puppy! In those sorts of stories, there's a very clear conflict between the two and often all of the bad guy's minions are just so many obstacles the hero has to overcome.

Sometimes that dynamic gets changed up, and the hero's Arch-Enemy and most heated rivalry is not with the Big Bad himself, but rather his top enforcer. This is especially likely in stories where the Big Bad is either a Non-Action Big Bad or spends all his time being Orcus on His Throne, and thus it's his enforcers who spend all the time out terrorizing The Chosen One and their loved ones. Another scenario where this is particularly likely is if the Big Bad is some abstract force of evil or an Eldritch Abomination, but has a more human Mouth of Sauron or chief disciple who is carrying out its wishes and interacting with the heroes. A third common scenario is where the Big Bad is the Arch-Enemy of either The Mentor or a Big Good type figure, and thus that person is the one who engages with the Big Bad, while The Hero faces The Dragon, whose actions are often what kicks off the plot.

Tends to overlap with Dragon-in-Chief, and may lead to a Dragon Their Feet situation, where the hero and the dragon only settle their score after the Big Bad has already been killed or defeated. Naturally, a subtrope of both It's Personal and The Dragon. Compare with The Heavy where a villain other than the Big Bad has the biggest villain role, and Rival Final Boss in which The Rival is also The Dragon.