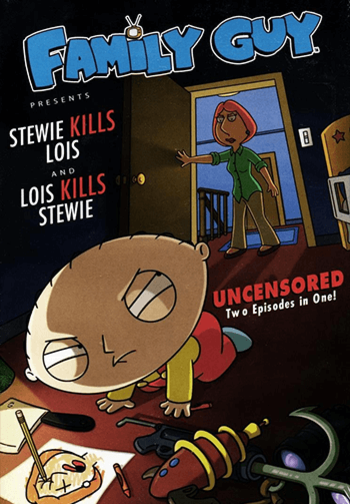 The apple may not fall far from the tree, but it can roll straight down the hill.
Arthur Pendragon: I cannot give you the land. Only my love.
Mordred: That's the one thing of yours I don't want! The quest knights have failed. They're all dead. And YOU... are dead, too. I shall come back and take Camelot by force!
— Excalibur
Advertisement:

Some children just don't see eye to eye with their parents. They may argue with them, flout their authority, or pretend they don't exist. This character, however, goes that extra mile. They're not only on a different page from their mom or dad, but a different side morally as well—and since the parent in question is at least nominally heroic, there is no way this is going to end well. Mom or dad might be a force for good, but their child is not, and is willing to let them know it. They're not Self Made Orphans, but if they get their way, they will be soon. Also closely related to Abusive Offspring, however, it's possible for antagonistic offspring to still retain some sort of heroic quality, or to merely ignore their parents; Abusive Offspring are actually directly physically, sexually, or emotionally abusive to their parent.

This trope is the inverse of the situation found in the Archnemesis Dad and Evil Matriarch tropes: one of the protagonists has a child who also happens to be pretty darn evil, and an opposing force within the story. Why this happens can vary wildly. Maybe the child is the result of abuse, abandonment, or neglect. Maybe they were mentored or raised by one of their parents' enemies and just don't know any better. Maybe their parents are separated, and it's the evil one who got custody. Or maybe they were just born bad. Whatever the case, expect a lot of angsting about Where Did We Go Wrong? on the part of the heroic parent or parents.

Since most heroes in fiction are younger, this trope isn't as common as the Archnemesis Dad and Evil Matriarch tropes. Freudian psychology often justifies this through a theory known as the Oedipus Complex. See Offing the Offspring and Self-Made Orphan for what this might lead to, and taking it to extremes may result in Genocide from the Inside. Can easily overlap with Enfante Terrible and Teens Are Monsters, although it doesn't have to. If one party is unaware of the relationship, it might lead to a Luke, I Am Your Father/Luke, You Are My Father moment when the secret is outed. In fantasy works, this character stands a good chance of being a Bastard Bastard or The Evil Prince. See Evil Orphan, for when the kid isn't actually yours, Cain and Abel, for when they go gunning for their siblings instead of mom and dad, and Evil Nephew when the target is an aunt or uncle. If the offspring finds allies, you have a dark version of Friends Are Chosen, Family Aren't. See also A Pupil of Mine Until He Turned to Evil for mentor relationships, and Hates Their Parent, for when the relationship isn't outright antagonistic.

A subtrope of Older Hero vs. Younger Villain.