Skull for a Head 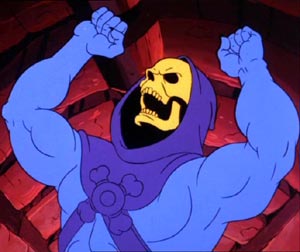 When skin moisturizing goes horribly wrong.
"A 'Mech as powerful as possible, as impenetrable as possible, and as ugly and foreboding as conceivable, so that fear itself will be our ally."
— General Aleksander Kerensky (on the design order for the 100-ton Atlas BattleMech), BattleTech
Advertisement:

A character has a skull for a head. This may be because the character is a supernatural being, or due to some disfigurement that makes their head look like a skull. Occasionally used to make a robot look menacing, with a skull instead of a head — see SkeleBot 9000, although this also covers robots whose whole bodies look like skeletons. Fully human characters may paint their faces to look like skulls; done right, this can appear almost as terrifying as the real thing, or arguably even more so.

In all cases of this trope, the rest of the body is relatively normal (i.e., not an animated skeleton.)

A subtrope of Skeletal Appendage. See also Dem Bones, Flaming Skulls, Flying Face, Scary Skeleton, and Skeletons in the Coat Closet. Often overlaps with Obviously Evil. Depending on if it moves, it could possibly be an Expressive Skull. If the rest of their body is attractive, this could be an extreme case of Butterface.