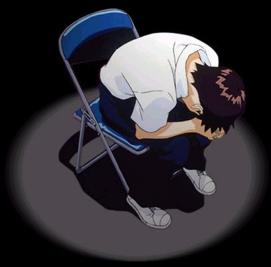 It's ok, Shinji. It's ok.
"What a piece of work is man! How noble in reason! how infinite in faculties! in form and moving, how express and admirable! in action how like an angel! in apprehension, how like a god! the beauty of the world! the paragon of animals! And yet, to me, what is this quintessence of dust? Man delights not me, nor Woman neither."
— Hamlet, Hamlet
Advertisement:

Angst, literally German for "fear" (and "anxiety", also Dutch, Danish and Norwegian for "fear"), has become a flexible literary term which can be used to mean any number of things. This is only appropriate for a word that's Older Than Print at least, going back to the eighth century, if not further.

In literature, the angst usually referred to is existential angst, exemplified by questions such as "Who am I?" and "Why am I here?" Existentialism as a literary movement emphasizes the search for meaning as the most important source of tension in a person's life, and by extension, in a protagonist's life. This type of angst is best exemplified by writers such as Kierkegaard, Sartre, Kafka, Camus and many others. The Danish philosopher Søren Kierkegaard (1813-1855) might be the trope or more like concept codifier. Angst defined by him is fear of failure, fear of making the wrong choices, and the fear of something that you are unsure of the outcome of. It comes with personal freedom and responsibility in a world much greater than you. The word Angst was also popularized by Existential philosopher Martin Heidegger (who is often called "Philosoph der Angst"/"Philosopher of Fear"), whose book "Sein und Zeit" is largely about Angst. He defined Angst as the primary emotion of all human beings and the main driver behind most social behavior of humans, with the extreme cases of social recluses and collectivists mass societies. Heidegger's philosophy became extremely popular in France (where it influenced Existentialism and Post -Structuralism), Russia, and Japan (where the Kyoto School combined the idea of Angst with Buddhist concepts of emptiness, finitude and "Sunyata", meaning "absolute nothingness").

Because of Heidegger, Angst is often a clichèd trait of Germans. ( This is why there is the term of "German Angst", which is also sometimes used to refer to some hysteric reactions in German politics and some German laws, which often overemphasize security.)

(Note: There were some psychologists who use Heidegger and Kierkegaard to treat anxiety disorders.)

In classical music, angst is strongly associated with Jewish European composers; Gustav Mahler is the Ur-Example. In modern music, angst is strongly associated with alternative music movements such as metal. Sometimes the word "emo" is used interchangeably, although just about every musical genre has examples of angst. Elements of the blues in classic rock have their own unique form of angst. In Fan Fic, angst is often used as an umbrella term for any kind of Dark Fic. Like all fanfic, it adheres very strongly to Sturgeon's Law - for every brilliant execution, there are ninety-six examples that fall flat on their face, and another three that are merely mediocre.

Compare Wangst, where the reader or viewer comes to hate the angsty character for being too "whiny" or "wanky", and Angst? What Angst?, where a situation that might be expected to leave a character grieving or upset leaves no impression on them whatsoever. See also Deus Angst Machina and True Art Is Angsty. For the feelings that angst is generally meant to invoke, see Emotional Torque. See Angst Dissonance for when the audience doesn't sympathize with the character's angst.