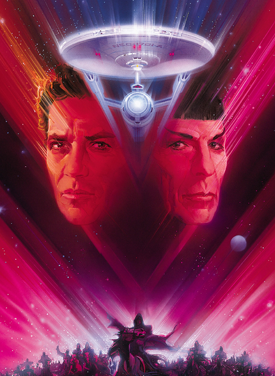 Adventure and imagination will meet at the final frontier.
"What does God need with a starship?
— Captain Kirk
Advertisement:

The one where Spock’s never-before seen or mentioned Vulcan half-brother hijacks the Enterprise to look for God...(?)

Star Trek V: The Final Frontier is the fifth movie in the Star Trek film series, released in 1989. They've stared at V'Ger, defeated the vengeful Khan, found Spock, and rescued the whales. But can the Enterprise crew survive their greatest challenge yet? William Shatner ... in ... The director's seat!

With a brand-new Enterprise, Kirk and crew set out to resolve a Hostage Situation only to discover that they've been suckered as part of a grander scheme by Spock's long-lost half-brother Sybok. Sybok commandeers the Enterprise, winning over most of the crew by using his Telepathic Epiphany Therapy on them. After gaining control of the Enterprise Sybok makes them set a course for the center of the galaxy, where he believes God is waiting. With most of his crew now working against him, Kirk must work his way up the Enterprise to the bridge armed with his wits and a pair of rocket boots. Ultimately, he fails to retake the ship in time to be of much use, so he continues on to discover what lies at the heart of the galaxy.

Tropes seen in The Final Frontier include: