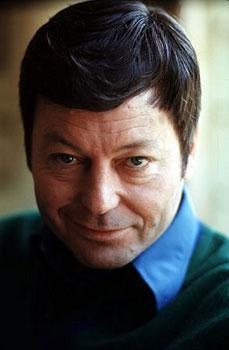 "Star Trek has brought so much of what I want within my grasp."
Advertisement:

Jackson DeForest Kelley (January 20, 1920 — June 11, 1999), better known as DeForest or just plain De, played villains in a long string of Westerns before being cast as Dr. Leonard "Bones" McCoy in Star Trek: The Original Series. Alongside William Shatner and Leonard Nimoy, he made up a third of the trio that headed the show's cast. At the time, he was considered an odd choice; he was best known for villain-of-the-week roles in westerns by Paramount, often portraying the sort of black-hatted Card-Carrying Villain that would randomly shoot a dog just to establish his villain cred. Some of his fellow cast were quite surprised that he was being tasked with playing a good-natured hero in their new series... and that he was such an amazingly sweet man in person.

Eleven years older than the young cast (most of whom, besides James Doohan, were in their mid-thirties), Kelley grew up on "the sawdust trail" in rural Georgia as the son of a preacher. In his late teens he moved to Long Beach, California, to pursue his dream of becoming a performer. There he met the love of his life — Carolyn Meagher Dowling, with whom he was co-starring at The Long Beach Playhouse. They continued their courtship throughout Kelley's service in World War II and married in 1945. He never looked twice at anyone else.

Kelley brought to the role of McCoy an earthy humor, gentle sensitivity, and caustic compassion that would make him, and the role, famous. While he never quite reached the popularity levels of the dashing, golden-haired, devil-may-care Captain or the dark, enigmatic Vulcan, his bright blue eyes, gorgeous smile, Southern accent and charisma earned him a sizable fanbase in his own right, aided by his constant snark-fests with Nimoy as Spock. Although he would get little work outside the Star Trek franchise for the remainder of his life, he never sought the limelight: De and Carolyn were very private people, and no actors ever crossed the threshold of their own private house. Ironically, at the time of production, Kelley was the best-known actor of the three — Nimoy and Shatner had done stage work and not much else prior to being cast.

Movingly, it was De who was chosen to "pass the torch" to Star Trek: The Next Generation, appearing as a feisty, 137-year-old Admiral McCoy in "Encounter at Farpoint", written by TOS veteran D.C. Fontana. His last line, delivered to Data, was, "Treat her like a lady, and she'll always bring you home."

Like Leonard Nimoy, De turned down the offer to reprise his role a final time in Star Trek: Generations. He stated his reason being that he felt that it would ruin the sense of closure already nicely depicted in Star Trek VI: The Undiscovered Country.

Shy by nature, De appeared at conventions only infrequently and did even fewer television interviews, confessing on Merv Griffin that "I'm so scared — I never do talk shows, you know, I'm absolutely a wreck." When he did appear, however, Kelley was universally remembered by fans as warm, witty, down-to-earth, incredibly welcoming, and a gentle spirit with the same compassion and general goodwill that made his character so famous. The fact that he inspired more than a few fans to go into medicine was always deeply flattering to him.

He was the first of the original cast to pass on, dying of stomach cancer in 1999. He left behind an immortal character who embodied the essence of human compassion. Kelley's work would not go unrecognized — he was given a star on the Hollywood Walk of Fame, located, fittingly, outside the Galaxy theater.

Out of respect for his passing, when he "appeared" in the Futurama episode "Where No Fan Has Gone Before", his character has no lines. By contrast, Doohan, who had actively declined to participate, was replaced with a Suspiciously Similar Substitute named Welshy, who is almost immediately killed to prove that the situation is serious.

He was the only original cast member not to write an autobiography.note He made a joke of this during a convention appearance in the mid-nineties, when he jokingly threatened to Shatner and Nimoy — both of whom had written multiple autobiographies by this point — that he was finally going to write his take on what really happened. Terry Lee Rioux published his biography, From Sawdust To Stardust, in 2005.