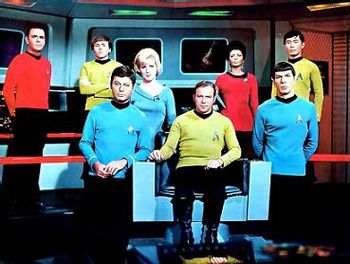 Star Trekkin', across the universe...

Star Trek is the first show in the Star Trek franchise. After the release of its spinoff series and the movies, it has been retroactively called Star Trek: The Original Series to differentiate it from the franchise as a whole.

The origin of the show came when Gene Roddenberry was looking to write hard-hitting political and moral commentary and could not do so with the regular dramas of the time. He deduced that by creating a science fiction show borrowing heavily from the film Forbidden Planet, he could slip in such commentary disguised as metaphors for the various current events. As such he pitched Star Trek to the networks as a merging of the two most popular genres of the time, science fiction anthologies and Westerns.note Notably, he pitched it as "Wagon Train in space", not "Wagon Train To The Stars".

While troublesome to produce, the show was a major Trope Maker, especially in Science Fiction (each of the three main characters has a trope named after them, and that's just for starters!). The cast was a dynamic mix of ethnicities and cultures, and while the focus was nearly always on Kirk, Spock and McCoy, they still had a Russian, an Asian and a black African woman in positions of responsibility, authority and respect, despite recent, brewing or ongoing conflicts concerning people of those ethnicities in Real Life. According to the cast members, near everyone in Hollywood wanted to be a part of Star Trek because of the steps forward it was making. In particular, George Takei said that almost every Asian actor wanted to be Sulu because they wouldn't be required to use an Asian accent or engage in Asian martial arts, instead breaking cultural stigma by being a practitioner of European fencing.note Takei facetiously put down fencing on his resume so he wouldn't be given a katana; once it came up in the script, he got a crash course the weekend before filming. He remains an avid fencer to this day. This also resulted in attracting multiple high-profile guest stars and guest writers, including Harlan Ellison, Theodore Sturgeon and Richard Matheson. Plots varied widely in quality from episode to episode and from season to season, depending upon who was writing and/or directing. An episode chosen at random can be anything from high camp to geopolitical allegory to genuinely intelligent drama, and is likely to be at least two out of those three.

In some ways the show was way ahead of its time; in other ways, it is a product of its time. The women usually (but not always) appeared in the roles of assistants and secretaries, wearing go-go boots and miniskirts. (At least some of that was due to Executive Meddling; additionally, Grace Lee Whitney has mentioned that the female regulars objected to initial efforts to have them wear pants because they preferred showing off their legs). While the visual design of the show was ambitious, the actual production quality has not aged well.

The show did have some developmental history before it came to air. The original Trek pilot featured Captain Pike played by Jeffrey Hunter, and Majel Barrett as his first officer. The pilot was praised by the network as great science fiction, but was considered "too cerebral" for the target audience and not as action packed as the network wanted to market it. This resulted in a near entire-cast replacement for a second pilot episode, except for Spock. In fact, Doctor McCoy didn't appear until after the second pilot was filmed. However, that first pilot has remained as part of the franchise canon and did not go to waste—Roddenberry used a lot of it for the series' only two parter, "The Menagerie," which proved a Hugo science fiction award winner, and the pilot has been included in various releases of the series. Captain Pike himself was recast in the 2009 Star Trek film by Bruce Greenwood, and played by Anson Mount in the second season of Star Trek: Discovery (with Rebecca Romijn as Number One, Ethan Peck as Spock and the Enterprise herself), wherein afterwards Pike received his own show called Star Trek: Strange New Worlds, coming full circle.

While the show was considered popular with general audiencesnote the actors and studio were flooded with mail, and there was a huge amount of tie-in merchandise almost immediately and plenty of demand for more, the Nielsen ratings branded it a flop. Star Trek barely managed three seasons before being officially canceled, with a close call on the second season. Within a few weeks of its cancellation was the monumental first Moon Landing, and as a result the subsequent reruns of Star Trek were more popular than the original run. Television was also changing at the time, starting to account for demographics along with overall ratings, and found that Star Trek had snagged the most coveted 18–35 male group that nearly every show was aiming for. Star Trek conventions were jammed with thousands of dedicated fans, and seeing the potential for a revisit led into production for a new TV series. The first attempt was Star Trek: The Animated Series, which suffered from Filmation's cheap production values, but more than compensated by having most of the original writers and cast, producing a great series that earned the franchise's first Emmy Award. Later, in the hope of creating a television network, a new Star Trek series was developed, eventually reworked into the first Star Trek feature film, Star Trek: The Motion Picture, in 1979, after the monumental success of Star Wars. This led to an ongoing film series, the success of which led to the Sequel Series in 1987, Star Trek: The Next Generation, and another 18 straight years of Star Trek on television.

If you're in the US, you can watch all of the episodes on the Paramount+ network. This show also has a tool for gathering and voting on Favorite Episodes

. And over here we have a Recap page.

The subtitle "The Original Series" is a Retronym used solely for commercial clarification once Star Trek: The Next Generation came out. It has always been referred to as Star Trek in its own opening sequence.

Character profiles and roles in the script:

In Futurama, the Star Trek fandom grew from easy-to-punch nerds to a religious cult that influenced countries, eventually getting to the point that world leaders executed Trekkies en mass and scrubbed every known existence of Star Trek from public knowlege.

In Futurama, the Star Trek fandom grew from easy-to-punch nerds to a religious cult that influenced countries, eventually getting to the point that world leaders executed Trekkies en mass and scrubbed every known existence of Star Trek from public knowlege.