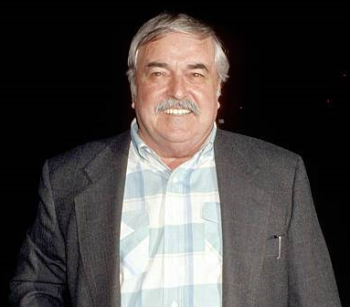 "I really didn`t have to work, shall we say, with Star Trek. It was a natural. When I opened my mouth, there was Scotty. It`s like I tell people what you see in Scotty is 99% James Doohan and 1% accent."'
Advertisement:

James Montgomery Doohan (March 3, 1920 — July 20, 2005) was a Canadian actor known to every Science Fiction fan as Montgomery "Scotty" Scott; the plucky engineer of the starship Enterprise in Star Trek. He was arguably one of the most popular characters on the show. Part of this is down to the fact that he was one of the more kindly stars on the show and took great lengths to acknowledge the fans that made the show so popular, always being happy to spend time chatting to the fans. His work as Scotty also proved as the inspiration for many people to take up engineering as a profession. The Other Wiki put it best when they said "Doohan was considered by some to be one of the most giving and affable stars of the Star Trek franchise." One of his proudest moments involved talking a fan out of suicide

, eventually finding out that because of him, she had gone and achieved a degree in engineering, just one of many young fans who were inspired by Doohan to become engineers themselves.

Born in Vancouver, he served in the Canadian Army during World War II and survived charging up Juno Beach on D-Day, only to be accidentally machine-gunned by his own side while returning from a night patrol. His life was saved thanks to a bullet bouncing off a cigarette case in his chest pocket; however, he lost the middle finger on his right hand in the process. He took great lengths to conceal that injury on TV, even using hand doubles for close-ups, but the injury is occasionally visible, such as in TNG's "Relics" or during the early bridge scenes of Star Trek V: The Final Frontier.

It was clear that, although he was originally considered a semi-regular on Star Trek, that Scotty was an important character nonetheless, often being the man put in command of the Enterprise while Kirk and Spock went down on away missions and much more often pulling off miracles down in Engineering. Doohan was also an accomplished voice actor and contributed many voices on the main show and on the animated series as well. In fact, if you include all his voices in the animated series, he had the most roles in the franchise! One of his most famous scenes in Star Trek was during the popular "The Trouble With Tribbles" episode, where he refuses to let Chekov fight a Klingon insulting Kirk, only to attack first once the Klingon insulted the Enterprise herself.

He helped create the Klingon language. The few words uttered in Star Trek: The Motion Picture were improvised by Doohan, providing the basis for a full-fledged language created by Marc Okrand for Star Trek III: The Search for Spock.

He famously disliked William Shatner, saying how much he admired Captain Kirk only to dislike the actor who played him. Fortunately, the two did make amends before Doohan's death. After Star Trek, he found himself typecast as Scotty and naturally found it hard to accept other roles. After a conversation with his dentist he eventually started Adam Westing and did cameos and appearances centered around Scotty. Although the Catchphrase "Beam Me Up, Scotty!" was never used in the series, he did use it as the title for his autobiography.

He suffered from a combination of Parkinson's disease, diabetes mellitus, and pulmonary fibrosis late in life, but still managed to father a child at the age of 80! Ultimately, he was also diagnosed with Alzheimer's Disease, but not before he reconciled with Shatner. It was a dark day for the series and its fans when it was announced he had passed away in 2005, fittingly on the anniversary of the Apollo 11 moon landing, widely believed to be both the greatest accomplishment in space exploration and engineering. Such is his legacy he joined costar DeForest Kelley in having a star placed on the Hollywood Walk of Fame. He was also so respected that when Simon Pegg was given the role of Scotty in the 2009 film, he promised a 100% tribute to the man. His role does reflect Doohan, particularly in the miracle Scotty works with the Enterprise during Nero's destruction.

Of further note, his son, Chris Doohan, has been involved with quite a few newer Trek projects, even reprising his father's signature role of Scotty on a couple of occasions, both in the Fan Sequel web series, Star Trek Continues, and, in an official capacity, on Star Trek Online, where he provides the voice-over for the character in the Agents of Yesterday expansion and in Star Trek (2009), where he had an uncredited cameo as Transporter Chief Lt Kyle.