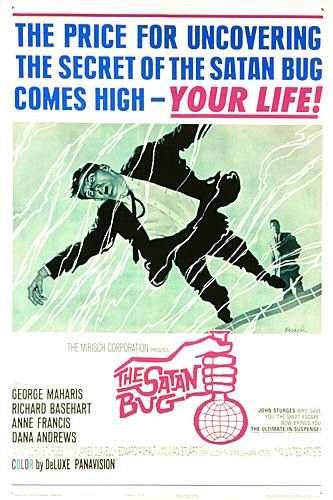 "But if you act now, you'll win this free vial of botulinus!"
"To this virus we have given a highly unscientific name, but one which describes it perfectly. The Satan Bug."
— Dr. Gregor Hoffman
Advertisement:

The Satan Bug is a 1962 science fiction/mystery novel by Alistair MacLean, he of The Guns of Navarone and Where Eagles Dare fame. MacLean wrote it under the pseudonym "Ian Stuart," but subsequent publications give his real name.

The Satan Bug concerns the theft of a Synthetic Plague code-named the Satan Bug from the Mordon Microbiological Research Establishment, a top-secret British research laboratory. With the lab's chief of security Neil Clandon having been murdered in the process, the British government tracks down Clandon's predecessor, Private Detective and Badass Pacifist Pierre Cavell, in the hopes that he can track down the Diabolical Mastermind behind the theft.

It was adapted into a 1965 film directed by John Sturges and featuring an early score by Jerry Goldsmith. While the story was mostly kept the same, all the action was relocated to America and almost the entire cast of characters had their names changed.