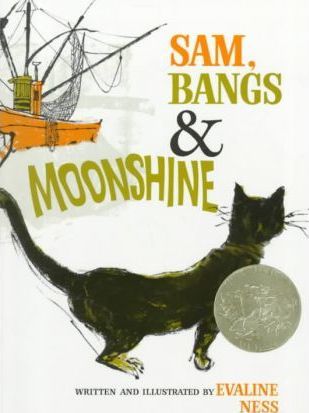 Sam, Bangs, and Moonshine is a children's book by Evaline Ness.
Advertisement:

It is about a girl named Sam who lives on an island with her father (who's an angler) and her cat Bangs and is home alone a lot. She makes a lot of things up, like Bangs can talk, she has a pet kangaroo, and her mother is a mermaid instead of dead. Most of the time, she's just playing but she also sometimes lies to her friend Thomas that these fantasies are true.

One day, Sam's father tells her to "talk real, not moonshine". She doesn't really know what "moonshine" is, but she guesses that it means lies, or "flumadiddle" as she imagines Bangs putting it. Even though she promised her dad not to "talk moonshine", she tells Thomas that her mother and kangaroo are on a rock called Blue Rock, belatedly realising that Blue Rock gets covered by the tide and that's where the story's drama comes in.