Film / Sally of the Sawdust 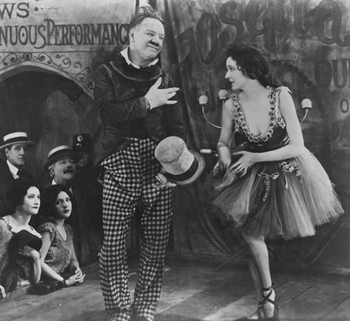 Sally of the Sawdust is a 1925 silent film directed by D. W. Griffith. It stars Carol Dempster as Sally and W. C. Fields as Professor Eustace McGargle.
Advertisement:

In the year 1900 or so, the wealthy Judge Foster disowns his daughter when she marries a man from the circus. Five years later, the young couple is dead, leaving behind a daughter of their own, Sally. Just a toddler at this point, Sally is left in the care of Professor McGargle, a circus conman.

Fast-forward to the contemporary 1920s, and Sally is now a young woman. Raised in the circus, she believes that McGargle is her real father. A handsome young man named Peyton Lennox falls for the free-spirited Sally. However, his father is friends with Judge Foster, who is naturally outraged that Peyton is cavorting with a disreputable circus girl. Of course, Judge Foster has no idea that Sally is his own granddaughter.

The film was based on the Dorothy Donnelly play Poppy, which would receive a second film adaptation in 1936. Incidentally, Fields originated the role of McGargle on stage and would later reprise it for the 1936 film version.