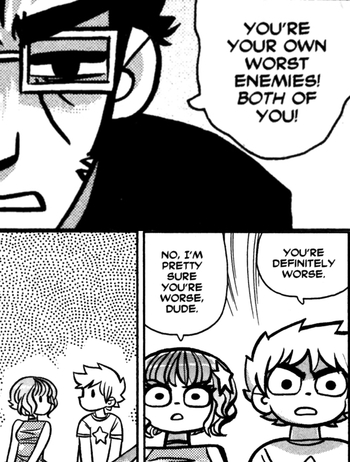 Surprisingly, people are less inclined to agree with you after you've tried to murder them.
Brock Rumlow: This is gonna hurt. There are no prisoners with HYDRA. Just order. And order only comes through pain. You ready for yours?
Sam Wilson: Man, shut the hell up.
— Captain America: The Winter Soldier
Advertisement:

So you're finally facing the villain. He's being all smug and trying to break you with his words, deconstructing your motives for fighting him and reminding you of how similar you are to him, unleashing a blistering spiel of how your flaws make you pathetic, making you uncomfortable with his too-close-to-truths, offering you the opportunity to join him, et cetera et cetera… and what should your response be? Tell him the error of his ways, and offer him a chance to join the good guys? A measured, reasonable response, indicating your disagreement? Let the villainous argument throw you and make you wonder if you and he are similar?

He's a villain. A bad guy. He has tried to kill you and your friends a dozen times over. He dangled your Sidekick and your Love Interest over a cliff, taunting you to pick one of them. He treats other people, including his own underlings, like dirt. He doesn't care about people, order, or whatever he's using to justify his actions—he just wants power. Dude's been through hard times? Shallow excuses to do bad things, we've been through hard times too and he never heard us vocally whining about it! And he ran over your daughter's puppy. You're nothing like him. He's wrong. So you tell it to him, spell it out if necessary, then beat the crap out of him in a manner most righteous (or, if you are a common human against a superpowered villain, or the work is not action-oriented, an Armor-Piercing Slap may be an appropriate outcome as well.)

This happens a lot. Heroes usually use the "fist to face" variant of this, though a hero giving a villain a verbal beatdown is not unheard of (though if the verbal beatdown goes on long enough, it becomes a Kirk Summation). Often done by the more practical Anti-Hero, who doesn't really care about philosophy, and just prefers to beat up anyone who has messed with them or their stuff.

More heroes will often at least listen before coming up with a counterargument. When the villain rationalizes their villainy with something truly depraved, the hero will often roar to the bad guy, "You're Insane!" before delivering the smackdown. They may, however, skip to this in subsequent encounters, when they already know that attempting to reason with this particular foe would be a waste of breath.

Doing this to another villain is even dumber, as they're likely to either not be big on listening, or have an outright conflicting ideology. But it still happens every now and then.

Sometimes, The Hero needs to be told "You Are Not Alone" to come up with this reply.

Combining it with the "No More Holding Back" Speech will just make it that much more badass.

Usually goes hand-in-hand with the villain having a breakdown, either before or after this reply is delivered.

Conversely, when the hero is on the ropes, he may interrupt the villain by saying Get It Over With. It tends to shock the villain that anyone would prefer death to listening to him.

As these generally occur at the conclusion of most stories, feel free to use spoiler marks if you think it gives away too much. For readers, spoiler-caution is advised.

The name is a reference to this being a response to a Hannibal Lecture, but it would be more accurate to refer to the trope Break Them by Talking, since Hannibal Lecture only concerns certain interrogation scenes.

Contrast Kirk Summation which is where the hero rebuts the villain's speech with his own. Here, the hero doesn't bother.

Compare Shut Up, Kirk!, You Keep Telling Yourself That, [Verb] This!, Armor-Piercing Response, Freudian Excuse Is No Excuse, and whichever variations of I Will Show You X! are said specifically to a villain. For the more… forceful version, see Talk to the Fist.

Honey's friends defend her against Nathan and his cruelty.

Was it worth it?

Honey's friends defend her against Nathan and his cruelty.

Was it worth it?