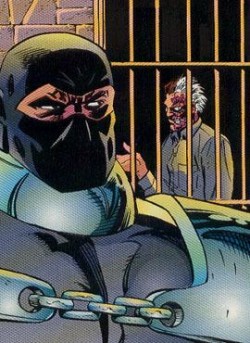 "I hereby sentence you to life without the possibility of parole..."
Batman: I've seen how you treat your prisoners. Forgotten and scared, without hope or compassion.
Lock-Up: Can it be you actually care for those creatures? You're just as crazy as they are!
— Batman: The Animated Series, "Lock-Up"
Advertisement:

A vigilante, usually a Knight Templar or Well-Intentioned Extremist, who, rather than killing his chosen targets, imprisons them. Unlike judges and prison wardens, this character typically has no legal authority to actually lock people up, and most often is doing this out of a desire to punish those they feel the law can't or won't, a desire for power over others, or quite frequently both. Don't expect this villain to be overly concerned about the rights of their prisoners.

The most common Character Alignment for this villain is Lawful Evil.

For actual jailers who abuse their prisoners, see Wardens Are Evil.