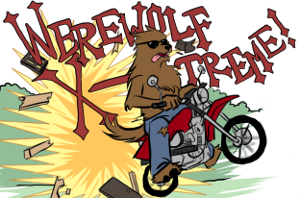 No one is safe now.
Advertisement:

Despair hangs over the tiny village as disappearances have become too numerous to ignore. Clues from the disappearances have all pointed to the same thing: Werewolves. Frightened, the Villagers must band together to find the werewolves among them before they're slaughtered one by one. But fear not Villagers because there is a hidden Seer among you!

The forum/party game Werewolf has a strong presence on the ComicFury forums. The game is simple: There are Werewolves among the players. The players have to figure out who they are and lynch them before everyone dies.

Over time the games have expanded to include art work by the hosts to illustrate events in the game and fully fledged storylines (Mostly involving a wizard). There are multiple variants of Werewolf played on ComicFury, presently including Werewolf and Mafia. Each game includes between fifteen and twenty five players.

All Werewolf and Mafia games
Advertisement: