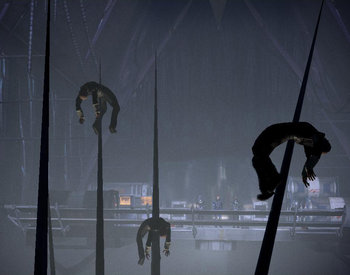 Where's the blood, you ask? Being replaced with cybernetic technology and machinery.
Tucker Foyle slides slowly forward onto his spar. He has a bullet wound in his back, at the shoulder. This itself would not be such a terrible thing, but the impact has driven him onto the wooden spike resting onto his chin. Tucker has been impaled. He is not dead. He will not die for several minutes, but die he will and there is absolutely nothing we can do about it.
— The Gone-Away World
Advertisement:

This trope is for when someone gets stabbed in a really big way.

The defining element of this trope is the shock value of the impalement: mere death by a bladed weapon (knife, sword, lightsaber, etc.) does not qualify unless the victim is stabbed, and in an extreme fashion — usually, the blade goes all the way through the body so that the point emerges from the victim on the other side. Garden-variety stabbings or vampire stakings don't count — extraordinary stakings do count. Imaginative impalements also qualify. This trope often appears with Anvilicious symbolism with a side dish of Freudianism: after all, the character was just run through with a really big rod... and bigger is better in bad.

Thanks to its sheer shock value, this trope is sometimes used on one of the good guys as a way to really raise the stakes — pun intended. Some go as far as using it on an important character to really mess with the emotions of the audience.

If it's a bad guy who's been impaled on a long, sharp thing in the hero's hand (such as a sword or spear), he'll sometimes pull himself along the shaft towards the hero, either to get close enough to kill them, or just to creep them out.

Dramatic impalement may be the result of a really successful attack (perhaps a Finishing Move) with a Blade on a Stick, or even by an especially strong Javelin Thrower. This can very often qualify as a Cruel and Unusual Death. If the victim is impaled through their neck, it's an Impromptu Tracheotomy. If the victim is impaled multiple times, you have an example of Human Pincushion. If the target moves but the big rod doesn't, it's an Inertial Impalement.

Real-life impalement isn't always fatal, but fictional characters who suffer this fate are almost always killed (or at least assumed to be dead).

Since this is a Death Trope, beware of unmarked spoilers.

See also Pinned to the Wall, which this trope can overlap with.

King Andrias impales marcy with his flaming sword once she tries to use the Calamity Box to get everyone to safety.

King Andrias impales marcy with his flaming sword once she tries to use the Calamity Box to get everyone to safety.