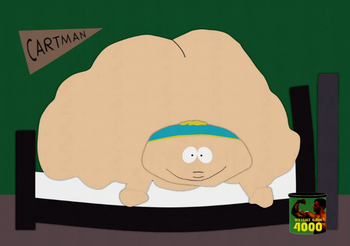 Pictured: Living proof that you can reach your goals by following your dreams.

Cartman wins an essay contest over Wendy Testaburger and uses a dangerous, muscle-building protein powder to get in shape. Meanwhile, the Mayor wants to use the publicity from Kathie Lee's visit to South Park to get out of the "pissant, white-bread mountain town" and further up the political ladder, and Mr. Garrison plots his revenge against Kathie Lee Gifford.