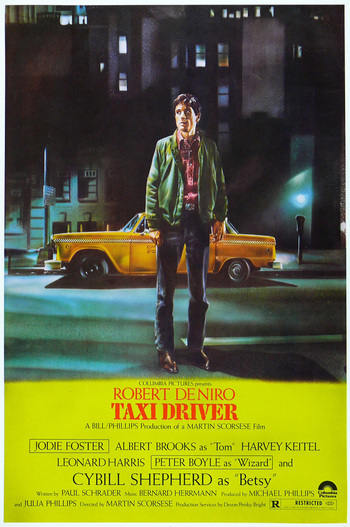 On every street in every city, there's a nobody who dreams of being a somebody.note Original poster by Guy Peellaert.
"Loneliness has followed me my whole life. Everywhere. In bars, in cars, sidewalks, stores, everywhere. There's no escape. I am God's lonely man."
— Travis Bickle
Advertisement:

One of Martin Scorsese's most famous movies, Taxi Driver (1976) is the story of Travis Bickle (Robert De Niro), an insomniac and depressed New York City cab driver who becomes obsessed with cleansing the city of human "trash" and goes insane.

The film was written by Paul Schrader and inspired by a breakdown he'd experienced in the mid-1970s which he hoped to get out of by "exorcism through art" (his words). Brian De Palma was originally tabbed to direct, but the film's producers decided to go with Scorsese instead after seeing Mean Streets. It's notable for containing both one of De Niro's most iconic roles and Jodie Foster's breakout role, as a child prostitute (she was twelve years old at the time).note The same year Foster was playing a pubescent hooker in this film, she was appearing in the Disney family film Freaky Friday.

Cybill Shepherd, Harvey Keitel, Albert Brooks, and Peter Boyle also appear in the film, and Bernard Herrmann composed the music score (his last).note He died just hours after completing the last recording session. De Niro, Foster, and Herrmann all received Academy Award nominations, while the film itself was nominated for Best Picture.

Made on a low budget but with heart and passion, Taxi Driver was shot extensively on location in New York City in the 1970s and remains the defining portrait of The Big Rotten Apple through capturing the pre-Dinkins era of the city. Its shots of Times Square's seedy porn district, the Alphabet City area where the movie ends and the fairly accurate chart of geography (rare for its time) made it a defining portrait of an American city. It won the Palme d'Or at the Cannes Film Festival, was nominated for several Oscars, and was a box office success, making roughly 15 times its budget back in revenue.

While controversial in its release, the film became positively notorious when John Hinckley, Jr.

cited it as the source of his obsession with star Jodie Foster and indirect influence on his failed assassination of President Reagan. Knowing this makes several scenes, including the whole side-story of Bickle's plot to assassinate a local senator and presidential candidate, a different experience to watch.

See also The King of Comedy, another Scorsese-directed film about a mentally-ill loner, now in Black Comedy flavor.

Taxi Driver is the Trope Namer for:

Are you troping to me?: