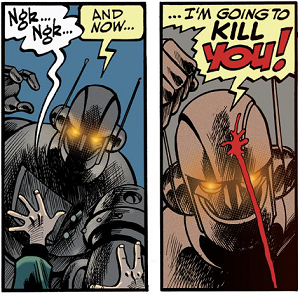 Someone threatens to kill someone else, often by yelling it at the top of their lungs or by simply saying it calmly. Or variations on this theme, most notably with the F-Bomb or with an accent such as "I keel yew!" Hilarity Ensues, especially if the threatened person replies with "Is That a Threat?" If there's no realistic chance of it being carried out, this is also quite a straightforward example of Ineffectual Death Threats. Unless said target dies, in which case they'll be near the top of the suspect list.

Note that this is a stock phrase and must be a variation on "I'll Kill You" and not just a threat on a person's life.

Contrast You Will Be Spared and I Kiss Your Foot.