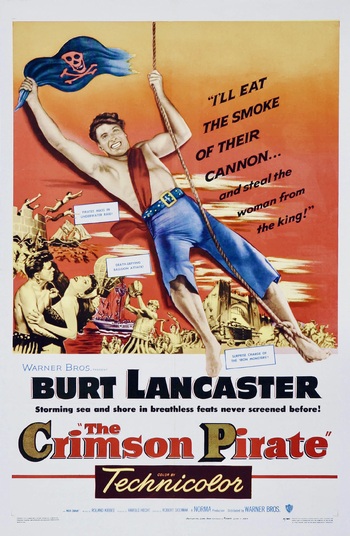 The Crimson Pirate is a 1952 adventure film directed by Robert Siodmak and starring Burt Lancaster.

Captain Vallo (Lancaster), known as "the Crimson Pirate", is the scourge of the Caribbean seas in the late 18th century. He and his men end up capturing Baron José Gruda (Leslie Bradley), a Spanish lord who's come to the islands to crush a rebellion led by a figure known as El Libre (Frederick Leister). Vallo gets the idea of selling the guns and gun powder on the ship to El Libre, and then sell him out for twice the price to the Baron. Except things don't quite go as planned, not least of which because Vallo ends up falling in love with El Libre's daughter Consuelo (Eva Bartok).

One of the best 1950s adventure and Swashbuckler movies — and one that runs almost entirely on Rule of Cool and Rule of Funny — the film also marked the third and final collaboration between Lancaster and Siodmak, who had a falling-out during the film, but it marks a high point in both of their careers.