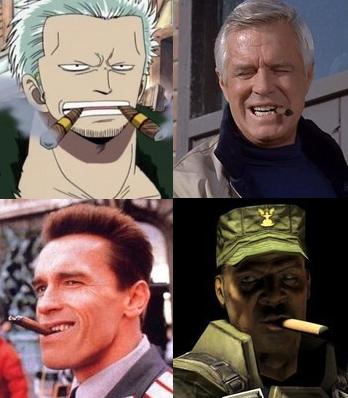 Because nothing says "manly" like a phallic symbol clenched between your teeth. Clockwise from top left: Vice Admiral Smoker, "Hannibal" Smith, Sergeant Johnson, Arnold Schwarzenegger.
Here with this handsome kid, ciga-cigar
Right from Cuba-Cuba, I just bite it
It's for the look, I don't light it
— Will Smith, "Gettin’ Jiggy wit It"
Advertisement:

A character who is never seen without his cigar, which is then used as a visual cue to some aspect of his personality. This is Almost Always Male (except in Cuba), so most of the examples are of male characters, although female examples are also possible.

This denotes that said character is a tough, aggressive, take-no-nonsense type. Because good cigars are an expensive habit, they also carry a connotation of wealth, power, and high status. Plus, having to prevent the cigar from falling out when talking makes them always speak with a sneer. Characters such as Da Chief, Sergeant Rock, The Generalissimo, and your local Corrupt Corporate Executive often chomp on cigars, as will anyone in a Smoky Gentlemen's Club who hasn't got a pipe. In animated or otherwise illustrated works, the cigar is more likely to be in the character's mouth at all or nearly all times, and tends to be impractically massive (it also tends to be shaped sort of like a football, while Real Life cigars are generally straight cylinders).

It's okay for heroes to smoke cigars seemingly because of the expense: average cigars are much more luxurious and expensive than the amount of cigarettes of the same weight. No matter how cool the smoking of cigars is made to look, it's not a habit as easily and cheaply picked up as cigarette smoking, so it's more acceptable to show a hero smoking the occasional victory cigar. Do Not Try This at Home unless you absolutely know what you're doing, as tobacco smoking carries the risk of developing respiratory problems up to and including emphysema and cancer regardless of whether it's a cigarette, a cigar, a cigarillo, etc.

If the character is also supposed to be brutal and/or cruel, or extremely hardy and a Psycho Knife Nut even in their unarmed state, it's also not uncommon for them to cut the said cigar prior to smoking using a razor-sharp cigar cutter. Bonus points if said cutter is then used/threatened to be used in a more mutilating manner. They may also use the cigar itself as a weapon, especially for Cold-Blooded Torture.

Always has a smoke on hand or in his mouth whenever he's not in character.

Always has a smoke on hand or in his mouth whenever he's not in character.