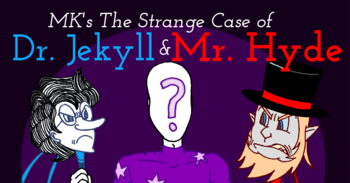 A light-hearted re-telling of Robert Louis Stevenson's classic story by Marika Kapogeorgakis, it follows the story of Dr. Henry Jekyll, a cowardly but well-meaning scientist focused on the betterment of humanity. After a string of bad luck, Dr. Jekyll drinks his Hyde Formula designed to get rid of a person's vices. Instead it gives him an alter-ego, Edward Hyde, a wild, flirtatious and mischievous troll. As they learn to live with each other, they begin to realise more and more that governor Carew is willing to go against the law as well as any ethical boundary for wealth and that the entire Board of Governors is no better. In order to expose their dirty and underhanded ways, Jekyll and Hyde will have to learn to put their heads together without butting them while also doing their best to not expose their secret.
Advertisement:

It is hosted on Comic Fury

and can be read here