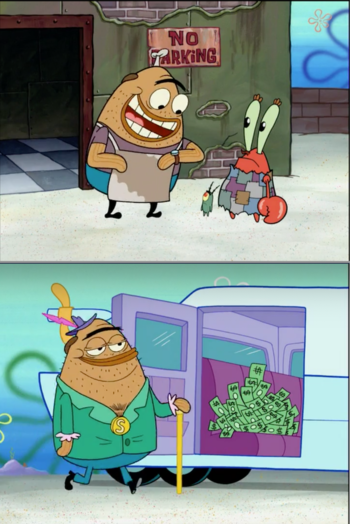 "Is it quitting time already?"
"There's something you don't know about me... I'm rich."
— Hodgins, Bones, "Aliens in a Spaceship"
Advertisement:

In fiction, it's apparently very hard for the wealthy to avoid being either a Rich Bitch or Spoiled Sweet, both are scorned by the average man. Many savvy characters spot this trend and hide their wealth. For some, they've even been separated from the family, and are wealthy in name only. Expect these characters to be kind, caring and generally the opposite of a Rich Bitch, so that the reveal of their wealth is more shocking.

In Real Life, there are several advantages to attempting this. Large wealth disparity tends to create serious rifts in casual social interaction; friends of a lower-income class may secretly resent you, or expect large monetary gifts and favors. On the other side of the coin, it is also hard to know who likes you for yourself, and who only likes you for your money (this is a reason many rich people only cavort amongst their own class). In addition, those who are known to be wealthy are frequent targets for lawsuits, and family members may even be targeted for kidnapping by those looking for a ransom. Hiding your wealth can prevent many problems like these.

Compare King Incognito, where the secret might be some other type of power besides wealth, Slumming It, where this is done for fun, and Affluent Ascetic where a person who's known to be rich chooses to live modestly or even spartanly. See also Non-Idle Rich, for when the wealthy person works a "regular" job for fulfillment and/or helping others. Contrast Mock Millionaire.

When Molly first meets Brendan, he seems like a normal boy until he reveals he's rich and his last name is Brandenham, who's family is known to be rich.

When Molly first meets Brendan, he seems like a normal boy until he reveals he's rich and his last name is Brandenham, who's family is known to be rich.